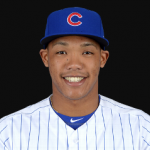 In 2012, he was drafted by Oakland Athletics in Major League Baseball Draft. He started with Arizona League Athletics. In 2015, he made his MLB debut. In 2015, he was listed as the third-best prospect in professional baseball by Baseball America.

Russell is the married man. He is married to Melisa Reidy in January 2016. The couple has a son named Aiden Kai Margallo Russel who was born in August 2015. He also has a daughter from his former relationship with Mallory Engstrom named Mila Jade Engstrom-Russell who was born in May 2015.

In 2017, he was accused by a third-party of domestic violence against Reidy. This was because she posted a photo to Instagram and one of her friends commented on the post accusing Russell of mentally and physically abusing his wife. Then she filed for divorce. Two weeks later he was not allowed to cooperate with MLB’s investigation. He was put on the administrative leave.

Then again on 19 September 2018, she posted a lengthy blog in which there is a detail of the physical and emotional abuse that she has suffered through the year when she was with her ex-husband Russell.

Trivias About Addison Russell You Need To Know.