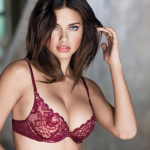 The beautiful and gorgeous Adriana Lima is Brazilian fashion model and actress, best known as a Victoria's Secret Angel since 1999, as a spokesmodel for Maybelline cosmetics since 2003 and for her Super Bowl and Kia Motors commercials. She was born on June 12, 1981. She belongs to Brazilian nationality. She is the former Victoria’s secret model and also an actress. She has also remained spokesperson for the popular cosmetic brand Maybelline from the year 2003 to 2009. She always had that star quality in her from the very early years on. She participated in the Ford Supermodel of world contest at the age of thirteen and won the title. She aspired to become a model from her beginning years and she successfully accomplished her dream.

Adriana Lima is among the few super models who had that inherent quality of starlet in her. She’s blessed with amazing looks, she’s got the perfectly sculpted body and her charm is almost like irresistible. The sexy siren stands tall at five feet and ten inches. She definitely got a great height. Her trainer exclaims that she is one of the dedicated and disciplined people when it comes to workouts and healthy eating. She is conscious about her diet as much as she is about her appearances.

Every aspiring models dream to become Victoria’s secret models, but what they don’t understand is the price it takes to be one. Adriana Lima is perhaps one of the most famous and talked about VS model. She can literally set the runway on the fire when she graces the ramp with that super glamorous bikini on with the wings on her back. She’d look like an angel. She is just amazing. Big names, like Versace, Dolce, Gucci, Prada, Armani look forward to work with her because they know she’d do all the justice to their creation. Her entire modeling career, her accomplishments, endorsements and many other gossips are well traced in the Wikipedia.

Hollywood is probably the most chaotic and bizarre industry ever. And to survive there takes a lot. And looking good is one of the challenges to the celebs. Adriana Lima has the strong influence in the fashion industry. Many aspiring models look up to her. She is photographed everywhere and her every personal details associated with her life is written in the tabloids. It’s sometimes a tough call to deal with all the happenings. Thus, she never underestimates the power of press and the critics. She always dresses perfectly. Her hair styles and make up look o so trendy. She’s got that beautiful long and toned legs, and she knows how to flaunt them.

She married her husband Marko Jaric back in 2009. He is Serbian professional basketball player. The two make a beautiful looking couple. They are the proud parents of two daughters. Valentina was born on November 15, 2009 while Sienna stepped in the world in September 12, 2012. But it’s almost hard to believe that she is the mother of two. She has maintained her figure fantastically. She and Marko have been married for now four years and are still tight together. They are very less likely to divorce. Both of them understand the significance of giving each other their space, and either of them understands the career they’re in. And thus, they have fewer arguments. She is living a blessed life with her family.

She is fantasized by men all over. It’s hard to resist her. She’s got that natural sex appeal that men find hard to refuse. No wonder she was ranked #1 on Askmen.com Most desirable women in 2004, 2005 and 2012. She even defeated hotties like Angelina Jolie, Hallie Berry and Charlize theron. She is the world’s one of the top fashion models. She has an estimated net worth of $ 45 million and earns $ 7 million as her annual salary. That’s a massive amount of fortune and she’s only thirty two years of age. She’s still got a long way to go ahead. She’s doing amazing for herself.