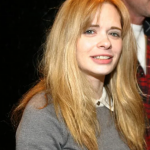 Adrienne Shelly was an American actress, film director, and screenwriter who was well known for her roles in "The Unbelievable Truth"(1989) and "Trust"(1990). Known for her marvelous acting skills, Shelly also had written, co-starred in, and directed the 2007 posthumously-released film, "Waitress".

Shelly however was just 40 years old when she was found dead, hanging in the shower of her West Village work studio apartment on November 1, 2006. Her death was covered on national media as well it looked suspicious if she had committed suicide or was a murderer. Her husband recently released a documentary based on her life titled "My Journey to Adrienne" after 15 years of her death premiered on December 1, 2021.

She was married at the time of her death and was even a mother of their daughter, Sophie. In her honor, an annual Adrienne Shelly Award is given to the film which has the storytelling of most passionately opposing violence against women.

What is Adrienne Shelly Famous for?

Where was Adrienne Shelly Born?

Adrienne Shelly was born on June 24, 1966, in Queens, New York City, United States. Her birth name was Adrienne Levine. Her nationality was American. Adrienne belonged to the White ethnicity while Cancer was her zodiac sign.

Born as the daughter of her well-to-do family; Sheldon Levine(father) and Elaine Langbaum(mother), Shelly grew up alongside her two brothers, Jeff and Mark, on Long Island. She had an interest in theatre and performance ever since she was young as she even had begun performing when she was just 10.

Her parents always supported her and even had enrolled at Stagedoor Manor Performing Arts Training Center. She attended Jericho High School in Jericho, New York, following which she went on to Boston University, from where she got graduated majoring in film production.

She however dropped out after her junior year and moved to Manhattan.

Who was Adrienne Shelly married to?

Adrienne Shelly was a married woman at the time of her death. She had been married just once throughout her lifetime. Her first and the only marriage was with Andy Ostroy, with whom she met in 2001 on Match.com shortly after which they began dating and got married in 2002.

Andy is the chairman/CEO of the marketing firm Belardi/Ostroy through which he released a documentary about his dead wife after her 15th death anniversary in 2021.

The couple had a daughter together named Sophie whom they welcomed in 2003, as she was even just 2 years old when Adrienne died.

How did Adrienne Shelly die?

Adrienne Shelly's death came soon than anyone could have thought as she was just 40 years old when she was found dead, hanging in the shower of her West Village work studio apartment on November 1, 2006.

The incident left her husband, child, and relatives in shock alongside her thousands of fans around the world as it was very unexpected for her to commit suicide at the time when she was the happiest.

Her death was covered on national media as well it looked suspicious if she had committed suicide or was a murderer. Her husband however knew that she would never have taken her own life, as he insisted to the officers and brought about a re-examination of the bathroom that disclosed a suspect shoe print.

It was whole planned murder as police later arrested Diego Pillco, a 19-year-old construction worker from Ecuador, who confessed to killing Shelly and making it look as if she had committed suicide.

Adrienne Shelly had quite good earnings from her professional career as an actress and film director as well. Having her career started initially with a musical, "Annie", Adrienne just had started paving her strong presence in the world of acting through her marvelous talent becoming one of the popular actresses.

With her appearance in a number of movies, she surely had a healthy fortune estimated to be around $1.2 million.

Adrienne Shelly was a gorgeous lady with a well-maintained average body physique in her 40s at the time. She had a height of 5ft. 2inches.(1.57m) while her body weight was around 55kg. She had a fair complexion with blonde hair and blue eyes.