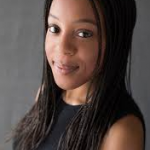 Alana Mayo and her partner, Lena Waithe became a famous couple from the LGBTQ community. They were an inspiration for many to come out of their closet. Likewise, She earned fame standing beside her partner, but she also has a reputable career in Hollywood.

However, their love story came to an end, and it left many of their fans broken-hearted. As many were shipping the couple and were celebrating their recent marriage, it is quite unfortunate for their split. Let’s look more into why Alana Mayo split with her partner, Lena Waithe, and what they have to say about each other.

Where is Alana Mayo from?

Recalling her early life, Alana was born in 1985 and is a native New York native, but grew up in Chicago. She celebrates her birthday on the 2nd of May, which makes her age 34. She holds an American nationality and comes from African-American ethnicity. Further, her birth sign is Taurus. The information about her parents and siblings is yet to be disclosed.

Where did Alana Mayo go for education?

Concerning her education, Alana was graduated from Columbia University with a Bachelor’s Degree in English and Film Studies. Besides, she also interned with Tribeca Films, Lee Daniels, and Warrington, early in her career.

The heartbreaking news came to those shipping Alana and Lena, who have been together for 4 years, as the couple split up after being married for only three months. She has been dating Lena, an American screenwriter, producer, and actress since 2016, and she had not dated another woman before Lena. Moreover, the couple was engaged on Thanksgiving day 2017 after Lena proposed her.

After being engaged for around two years, the couple secretly tied the knot, which the Emmy winner, Lena revealed during his appearance on Ellen show. She shared that she and she have been married since November but had not shared the news yet.

How much is Alana Mayo worth?

Being the vice president of production at paramount pictures, Alana must earn an impressive amount of money and fame through her profession in the field of the entertainment industry. Based on some online reports, her estimated net worth and salary is yet to be disclosed.

How tall is Alana Mayo?

Observing her body physics, Alana has a decent height and weight with black curly hair and black eyes. Her other body information is yet to be disclosed. In the case of disclosed, we will let you know.