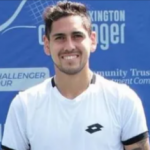 Alejandro Tabilo is a Canadian born-Chilean left-handed tennis player who is currently ranked at his career-high ATP singles ranking of World No. 95. He represented the Chilean team at the 2020 ATP Cup and the 2022 ATP cup. In February 2022, Tabilo reached his first-ever ATP final at the Córdoba Open before losing in the final against Spanish professional, Albert Ramos-Viñolas. He also reached the semifinals at the 2022 Chile Open.

What is Alejandro Tabilo famous for?

Where was Alejandro Tabilo born?

Alejandro Tabilo was born on June 2, 1997, in Toronto, Ontario, Canada. His birth name is Alejandro Tabilo. He holds Canadian-Chilean nationality. His ethnicity is mixed while Gemini is his zodiac sign.

He was born to Ricardo Tabilo(father) and Maria Tabilo(mother). He has a brother named, Sebastian. Due to his father's transfer to Chile, his family moved to Chile after his birth.

He was raised in Santiago, Chile along with his brother. Since his childhood, he was interested in playing tennis and wanted to pursue it as his career. His parents supported his decision and made him join tennis classes from a young age. He participated in several tennis competitions as a junior until he turned professional in 2015.

Who is Alejandro Tabilo dating?

Alejandro Tabilo is currently in a relationship with his girlfriend, Dasha Ivanova. Dasha is an American professional tennis player. The couple started dating in 2020. Besides, Alejandro Tabilo loves adventure and often travels to different places with his friends. He currently resides in Santiago, Chile.

How much is Alejandro Tabilo's worth?

Alejandro Tabilo has earned a good amount of money from his professional career as a tennis player. He has competed in several competitions, and also managed to earn the huge prize money of $690,190 at the young age of 24. He also earns additional income from his endorsement deals. Including all of which, Alejandro Tabilo has an estimated net worth to be around $1.5 million as of 2022.

How tall is Alejandro Tabilo?

Alejandro Tabilo is a handsome man with a well-maintained athletic body physique in his mid-20s. He has a fair complexion with black hair and a pair of brown eyes. He stands tall with a height of 6ft 2inches(1.88m) and has a bodyweight of 75kg(165lbs). He has a tattoo on his left arm.

Trivias About Alejandro Tabilo You Need To Know.