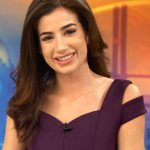 Alex Bozarjian is popular as an incredible television reporter. She has reported news from various aspects of the society for WSAV-TV. But, in recent times, one unfortunate incident that happened while she was covering the bridge run, has been causing a stir.

For all the good reasons, people especially women all over the world are showing support to the reporter. Those who have seen the video might already know what had happened. As per the footage that has been viewed more than 10 million times on YouTube. Following the incident, she has already filed a case at the police against the man and is already to sue him for the act of his. Let's know more about her and her unfortunate incident that happened in the Savannah Bridge race through this article.

Where is Alex Bozarjian born?

Recalling her early life, Alex was born in Savannah, Georgia and raised in Salem, Massachusetts, U.S. She is America by nationality and belongs to Hispanic ethnicity. Similarly, she is Christianity by religion. Information regarding her parents and siblings is yet to be disclosed.

Where is Alex Bozarjian go for education?

Concerning her education, Alex was graduated from the University of Central Florida in 2018 with a degree in broadcast journalism, along with Spanish language and literature.

When did Alex Bozarjian begin to reporting?

Who did slapped while Alex Bozarjian reporting?

As per live footage, Alex was slapped on the behind on live TV while covering a race at the annual Savannah Bridge Run on Saturday. As runner dashed past her many of them waving at the camera but one man identified as Tommy Callaway smacked her backside before sprinting away.

She filed a police report on the incident Monday and the man named Tommy Callaway was banned from future Savannah Sports Council races. On Wednesday, she said she supports criminal charges being filed against Callaway.

She said in a statement to CBS News, "I want to make it clear that this doesn't mean I can't forgive him. I home to get to that point eventually, but as in any sexual assault case, it has to be on my terms when I'm ready."

Callaway apologized on Tuesday, December 10th, 2019 for his awful act and an awful mistake in an interview with Alex's station, WSAV-TV. He said, "I have taken so much away from her...., I never intended to. I feel awful, I feel embarrassed and ashamed. I apologized. This was not right, It was an awful mistake." His attorney, Joseph Turner was earlier released a statement insisting they do not expect any criminal charges.

Is Alex Bozarjian married or not?

Reflecting on her personal life, It's still unclear whether Alex is a married woman or is currently dating someone. There is no information available on online sites about her affairs or marriage details yet. She has a quite secretive personality. So, we assume that she is unmarried and single now. If you know more about her and her personal details, please send us by using the comment.

How much net worth does Alex Bozarjian?

Being a WSAV-TV reporter, Alex earns a decent amount of money through her profession in the field of media. Based on some online reports, her current estimated net worth and salary is in the under a review. In the case of disclose, we will let you know.

How tall is Alex Bozarjian?

Observing her body physics, Alex stands a height of 5 feet 6 inches and weighs around 57 Kg. She has a pair of hazel eyes and brown hair color. Similarly, she used 32B and 6 (UK) shoe sizes. Further, her body measures 34-25-36 inches.