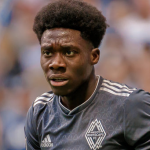 Alphonso Boyle Davies is a Canadian professional football player who plays for Bundesliga club Bayern Munich and the Canada national team. His playing position is a left-back or a winger. He is regarded as one of the best full-backs in the world due to his pace, dribbling, and creativity. Currently, he is playing for Bayern Munich. Previously, he played for Whitecaps FC 2. He is a left-foot player. His shirt number is 19.

Passionate and enthusiastic player, Alphonso Davies was born on November 2, 2000. His full name is Alphonso Boyle Davies. He was born and raised in Buduburam, the city of Ghana. His parents lived there while fleeing Liberia during the Second Liberian Civil War. His nationality is Ghanaian as he was born to a Ghana family. He was born to his father, Debeah Davies, and to his mother, Victoria Davies.  Moreover, he belongs to the African ethnicity. Likewise, as per his birthdate, his zodiac sign is Scorpio. He attended St Nicholas Catholic Junior High in the Edmonton Catholic School District. On 6 June 2017, he officially received his Canadian citizenship. About his siblings, he has two siblings: a sister named Ruth and a younger brother whose name is unknown at the moment.

Is Alphonso Davies Single or Dating?

Looking at his personal life, Alphonso Davies was in a relationship with fellow Canadian Jordyn Huitema, a forward for Paris Saint-Germain and the Canada women's national team starting from September 2017. However, on 22 May 2022, he confirmed on his social media that he and Huitema have split up as there is no any information about their breakup reason. At present, he is assumed to be single and is not dating anyone. It seems he is focusing on his professional career rather than being in a new relationship. Any updates on his love life will be updated here.

Alphonso Davies is a Canadian professional football player who currently plays for Bundesliga club Bayern Munich. He is a very talented football player and with his continuous hard work and dedication, he has accumulated a huge amount of money from his football career which is his major source of wealth. His income is from contracts, salaries, bonuses, and endorsements. In January 2019, he signed for Bundesliga club Bayern Munich for a transfer fee of $22 million (€19 million)-the highest fee in MLS history. As of 2022, his net worth is believed to be around €5 million where he received £4.4 million as a yearly salary from his current club. Besides this, he also earns a decent amount of money from sponsorship, salary from the national team, and endorsement deals with various brands including Nike, EA Sports, Crocs, Topps, and more. Currently, he is an ambassador for the United Nations High Commissioner for Refugees. Moreover, he has a lovely home in Munich, Germany, where he lives, and has a beautiful automobile collection, including a Ferrari, a Range Rover, and a Mercedes. Overall, he is satisfied with his earnings and is living a luxurious lifestyle from his earnings. In addition, his market value is around €70 million.

How tall is Alphonso Davies?

Alphonso Davies has got a great personality. Talking about his body, he stands at the height of 1.83m i.e. 6 feet and 0 inches tall. He has a bodyweight of 75kg. He has an athletic body build. His eye color is dark brown and his hair color is black. His other body measurement such as chest size, biceps size, and waist size is still got to get revealed yet. In addition, his sexual orientation is straight. Overall, He has a balanced body with good health. He has an attractive body figure. His smiling face and charming personality have helped him to gain the attention of all the viewers.