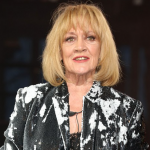 Amanda Barrie is one of the reputed names of the Hollywood Industry. She spends almost 6 decades in the industry and has continuously given entertainment to the audience to date. She started as a dancer in her initial career and later moved to act. One of the renowned roles in her career is Alma Sedgewick in the ITV soap opera, Coronation Street, which she played on and off for 20 years. She has since enjoyed a varied stage and television career which is mentioned below. If you are interested to know more about her and her journey in the film industry, you should have a scroll through the page below.

What is Amanda Barrie famous for?

When was Amanda Barrie born?

Amanda Barrie was born in the year 1935 to her parents. Currently, she is aged 86 years old and she enjoyed her birthday on September 14. She experienced her childhood in Ashton-Under-Lyne, Tameside, Greater Manchester, England, UK. She is the only child of her parents. They are Hubert Broadbent and Connie Broadbent. However, her parent's professional details are yet to be disclosed. Her grandfather's name is Ernest Broadbent. Similarly, she holds British nationality and belongs to the White ethnicity. Her zodiac sign is Virgo.

For education, She passed out from a local high school and then joined St. Anne’s College for further education. After completing college, she trained at the Arts Educational School and then at Bristol Old Vic Theatre School. She learned acting there and after that started her career at the theatre.

How did Amanda Barrie become an actress?

Amanda Barrie has multiple relationships in her life. She was in a romantic relationship with a singer, Billy Fury. They met in 1965 while filming, "I’ve Gotta Horse" and started dating each other. Later, she left him. After that, she met the director, Robin Hunter while she is working at the theatre. They dated while and exchanged their wedding vows in 1967. Together, they live blissful life and have not shared kids until their separation in the 1980s but they did not sign the divorce papers. Later, her husband passed in 2004 and she came out with her autobiography, "It’s Not a Rehearsal" where she mentioned herself as a bisexual.

She then has a romantic relationship with actress, Hilary Bonner. After dating while they exchanged their wedding vows on September 12, 2014. Currently, the pair lives blissful life and haven't shared a child yet. Previously, she was also linked with actress, Heather Chasen. However, the relationship did not work out and they separated.

Amanda Barrie has been engaged in the entertainment industry since 1953. She has spent almost 6 decades in the industry and appeared in several film and TV series during her career. Thus, she should have earned an impressive amount of money from her career. Based on some online sites, her current estimated net worth is said to be $3 million and she charges $5 Thousand per episode. Further, she has homes in Blackdown Hills, Somerset with a worth of $990,267 on average.

How tall is Amanda Barrie?

Amanda Barrie has an average body with a height of 6 feet 1 inches and she weighs around 60 Kg. Similarly, she has a pair of dark brown eyes and her hair color is blonde. Further, her other body information is yet to be public. In the case of disclosure, we will let you know.

Trivias About Amanda Barrie You Need To Know.