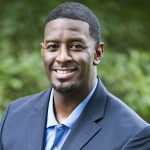 One of the American politician serving his first term as Mayor of Tallahassee since 2014 is Andrew Gillum. In February 2003, he was the youngest person ever elected to the Tallahassee City Commission. When he unexpectedly won the Democratic primary election over a field of 5 other candidates, he became the Florida Democratic Party's nominee for Governor of Florida on 28 August 2018.

Andrew Gillum was born on 26 July 1979 at Miami, Florida, the U.S. he was born to Charles Gillum who is a construction worker and Frances Gillum who is a school bus driver. he was the seventh child of his parents. He was raised at Gainesville. He graduated from Gainesville High School in 1998.

He moved to Tallahassee to attend Florida Agricultural and Mechanical University (FAMU). From 2001-2002, he served as President of the FAMU Student Government Association. He was the first student member of FAMU Board of Trustees. He was recognized as "Emerging Leader for 2003" by the Congressional Black Caucus Foundation. He was also a Board member of the Black Youth Vote Coalition which is a program of the National Coalition of Black Civic Participation in Washington, D.C.

Gillum’s height is 6 feet 3 inch and weight is 81 kg. He has the balanced and healthy body.

Gillum is the married man. His wife name is R. Jai Howard. They married on 24 May 2009. They met while studying at Florida Agricultural and Mechanical University (FAMU). They have three children named Jackson, Caroline, and Davis.