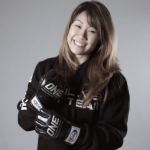 A Canadian-American mixed martial artist Angela Sun Ju Lee is well recognized as Angela Lee who currently competes in the Atomweight division of One Championship. She is best known for becoming the “Youngest MMA Champion” in 2016 when Lee beat Japanese veteran Mei Yamaguchi in One Championship 42: Ascent to Power. Further, Lee holds the 1st-degree black belt in Taekwondo as well as Brown belt in Brazilian Jiu-Jitsu.

Angela “Unstoppable” Lee is looking to redeem herself at ONE: MASTERS OF DESTINY on July 12 when she faces IBJJF Hall of Famer Michelle Nicolini in a strawweight bout at the Axiata Arena in Kuala Lumpur, Malaysia.

The Singaporean superstar is still on her quest for the ONE Women’s Strawweight World Title even after failing in her first attempt against titleholder Xiong Jing Nan at ONE: A NEW ERA. Lee’s resolve remains strong for a second run at the title, despite also holding the ONE Women’s Atomweight World Championship.

While some athletes struggle to make weight, the 22-year-old Lee says it has never been a problem for her. She maintains that she is comfortable juggling bouts at both atomweight and strawweight until she can achieve her goal.

Eight-time BJJ World Champion Nicolini will be the first hurdle the atomweight World Champion has to overcome if she is to earn another crack at Xiong.

With all her victories coming by way of submission, Nicolini is a definitive threat on the mat. However, Lee is confident in her well-rounded skill set and continues to work hard in training in order to nab the win.

Follow along with FanSided MMA for all your ONE Championship news and results.

Who are the parents of Angela Lee?

Back to his early life, Angela Lee was born in Vancouver, British Columbia, Canada. Her father, Ken Lee is Singaporean whereas mother, Jewelz Lee is a South Korean and both are a martial artist. She grew up with her three siblings: brother Christian Lee, an MMA fighter, Adrian and Victoria, both train in martial arts.

At the age of 7, Lee along with her parents moved to Hawaii. Following her parent’s footsteps, she began training at a very young age and started competing at the age of 6. Talking about her nationality, she holds both Canadian and American. She belongs to Singaporean-Korean descent.

When did Angela Lee pursue her MMA career?

Is Angela Lee married or not?

Reflecting her personal life, Lee is engaged to fellow One Championship fighter Bruno Pucci. They made the official announcement of their engagement on Instagram on 21st October 2017, when the lovebirds were at Haleiwa Beach Park in Hawaii on vacation.

Pucci joined Evolve MMA gym as a Brazilian jiu-jitsu instructor in November of 2012, and it was there that the pair met for the first time. The couple started dating in January 2017.

On 8th November 2017, Lee had a serious car accident after she fell asleep while riding her car. Fortunately, she managed to outlive the incident with injury and minor burns.

How much net worth is Angela Lee owns?

Angela Lee is the highest earning female mixed martial arts fighter in the world. However, she has not disclosed information about her net worth. As revealed, she is also the top five highest-paid One Championship fighters among both men or women suppressing Cris Cyborg and Joanna Jedrzejczyk.

Further, She took home $68,200 as the performance bonus defeating Mei Yamaguchi in 2016.

How tall is Angela Lee?

Observing her body physics, Angela stands a height of 5 feet 4 inches and weighs around 51.7 Kg. Similarly, she has black eyes and black hair color.  Her other body information is yet to be disclosed. In the case of disclosed, we will let you know.