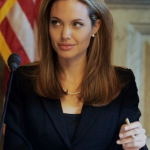 Along with being an award-winning actress, Angelina Jolie is a successful film director, renowned humanitarian and one of the world’s most powerful women.

Some magazine publication claimed that Angelina Jolie was dating with Tom Hiddleston. According to the magazine, She opened up about her love life to the Australian actor while they were hanging out at the ceremony.

Angelina Jolie was born as Angelina Jolie Voight in Los Angeles, California with Gemini birth sign. She is American by nationality. She has a brother named James Haven.

In her earliest years, she began absorbing the acting craft from her actor parents, Jon Voight and Marcheline Bertrand, who had studied with Lee Strasberg. Her good looks may derive from her ancestry, which is German and Slovak on her father's side, and French-Canadian, Dutch, Polish, and remote Huron, on her mother's side.

At age eleven, Angelina began studying at the Lee Strasberg Theatre Institute, where she was seen in several stage productions. She undertook some film studies at New York University and later joined the renowned Met Theatre Group in Los Angeles.

Angelina Jolie made her screen debut as a child alongside her father, Jon Voight, in Lookin' to Get Out (1982). Her film career began in earnest a decade later with the low-budget production Cyborg 2 (1993), followed by her first leading role in a major film, Hackers (1995). She starred in the critically acclaimed biographical cable films George Wallace (1997) and Gia (1998), and won an Academy Award for Best Supporting Actress for her performance in the drama Girl, Interrupted (1999).

Jolie's starring role as the video game heroine Lara Croft in Lara Croft: Tomb Raider (2001) established her as a leading Hollywood actress. She continued her successful action-star career with Mr. & Mrs. Smith (2005), Wanted (2008), and Salt (2010), and received critical acclaim for her performances in the dramas A Mighty Heart (2007) and Changeling (2008), which earned her a nomination for an Academy Award for Best Actress. Her biggest commercial success came with the fantasy picture Maleficent (2014). In the 2010s, Jolie expanded her career into directing, screenwriting, and producing, with In the Land of Blood and Honey (2011), Unbroken (2014), By the Sea (2015), and First They Killed My Father (2017).

Furthermore, she contracted to reprise the role of Maleficent in Disney's sequel, Maleficent II.

Awards and Achievements of Angelina Jolie

Net Worth of Angelina Joeli

According to Yahoo Finance, Angelina Jolie's net worth comes in at an astounding $200 million and salary around $15 million per movie. Most of it comes from her 20-year long career in Hollywood but her fortune also seems to stem from her frugality.

Prior, she married Jony Lee Miller in 1996, later they took divorce in 2000. She then married Billy Bob Thornton in 2000. After three years they also took a divorce in 2003. After this, she dates many celebrities such as Jenny Shimizu, Timothy Hutton, Colin Farrel, and Val Kilmer. Finally, in 2014, after 11 years she married Brad Pitt. But this marriage also ended in 2016. As of now, she was probably single.

Despite her personal struggles, Jolie has gone to great lengths to help others. A well-known humanitarian, she serves as a Special Envoy for the United Nations High Commissioner for Refugees. In addition to donating more than $5 million to the agency, she wrote a book based on her early experiences with refugees, the proceeds of which go to the UNHCR.

Moving towards her body measurements, she stands a height of 5 feet 7 inches and weighs around 54 kg. Her breast size is 36 inches, her waist size is 27 inches and her hips measure 36 inches, making the actress a perfect hourglass. Similarly, She has a pair of grey eyes and dark brown hair color. Furthermore, She wears a US shoe size 9.

Trivias About Angelina Jolie You Need To Know.