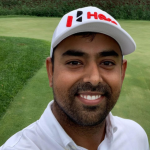 Anirban Lahiri is an Indian professional golfer who is well recognized for playing on the Asian Tour and PGA Tour. He learned to play golf at the age of eight from his father. "I would just go out there and I would go pick up golf balls for him, and we would go chip, putt for 15 minutes because it was getting dark," Lahiri remembers. "That's how it all started." Lahiri is also active in social media as he has gained more than 10.1k followers on his Instagram account and over 13.7K followers on his Twitter account. Additionally, he finished 118th in the FedEx Cup for the 2021 season retaining his card for the 2022 PGA Tour season with the highest finish of T3 at the Barbasol Championship. Anirban finished second at The Players Championship by one stroke to Cameron Smith in march 2022.

Anirban Lahiri created history after he finished as a runner-up in the historic Players Championship being held in Florida. Lahiri shot 12 under to finish second and missed the Players Championship Trophy of the prestigious PGA event by just 1 stroke. Australia's Cameron Smith lifted the trophy as he holed 10 birdies in a six-under-par 66 to win on 13 under. "I am just relieved. I have gone through two years of playing horrible and the last time I contended on a field this good was maybe five years ago...It has been a long time since I have been in this position, since I have played like this, in this position, in the quality field like this so it is huge for me," Anirban Lahiri said after finishing second.

"When you go through such a lean period for such a long time your belief takes a hit. You question yourself, 'Man, was that a flash in the pan? What are you doing? You haven't played well in so long," he said on his performance which also earned him a huge cash prize. This for me (finishing runner in Players Championship) is huge. I am going to recement my foundation and work upwards from here," he added.

Where is Anirban Lahiri from?

Anirban Lahiri was born on 29th June 1987 in Pune, India. He holds Indian nationality and belongs to the Asian ethnicity. Similarly, his religious belief is in the Hindi religion and his race is black. Anirban has celebrated his 34th birthday as of 2021 and as per his birthdate, his star sign is Cancer. He is the son of his father, Dr. Tushar Lahiri, who was a physician with the armed forces and a recreational golfer. His mother's name is Navanita Lahiri.

What does Anirban Lahiri do for a living?

Who is Anirban Lahiri's wife?

Anirban Lahiri is a married man. He tied a knot with his long-time partner, Ipsa Jamwal in May 2014 with whom he is blessed with a daughter named Tisya. The couple is having a good time together, which signifies they do not have affairs with other people. Concerning Lahiri's sexual orientation, he is straight. He currently resides in Palm Beach Gardens, Florida, U.S.

Anirban Lahiri has a net worth of $6 million as of 2022 whereas he also earns a fine amount of salary which is around $105,226 per year. With his calm and easy-going personality, he is expected to get more popular in the coming years, and we can expect him to climb the ladders of success. In addition, Anirban's major source of income is from his golf career.

Anirban Lahiri Height: How tall is he?

Anirban Lahiri stands at an ideal height of 5 ft 9 in / 175 cm and his body weighs around 176 lb / 80 kg. He has good-looking dark brown hair and eyes color. Moreover, his body build type is athletic.

Trivias About Anirban Lahiri You Need To Know.