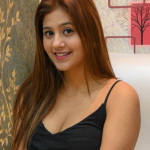 Anjali Arora is an Indian Tiktok Star, social media influencer, model, and actress who gained popularity thanks to her lip-sync videos that she uploaded on her Tiktok account: @anjimaxuofficially which had millions of followers.

Her latest popular video that went quickly viral was her cover dance on the song, "Kaccha Badam". After TikTok got banned in India, she created her YouTube channel titled "Anjali Arora" where she now has over one lakh subscribers.

She got popularity not only due to the TikTok but also in her other profession as a model as she even has appeared in several Punjabi and Hindi songs including "Temporary Pyar"(2020) which has over 330 million views as of 2022.

She has also acted in many TV series, Web series, Music Videos, and short films. Currently, she is on the popular reality show hosted by Kangana Ranawat, "Lock-Up".

With her growing popularity she has managed to amass a healthy number of followers on social media sites with over 11 million followers on her verified Instagram account: @anjimaxuofficially and over 248k subscribers on her YouTube account titled Anjali Arora.

Why is Anjali Arora famous?

Where is Anjali Arora from?

Anjali Arora was born on November 3, 1999, in Punjab, India. Her birth name is Anjali Arora. Her nationality is Indian. Anjali belongs to Asian ethnicity while Scorpio is her zodiac sign.

Born as one of the two children of her parents; Ashwani Arora(father) and Babita Arora(mother), Anjali grew up alongside her brother named Abhishek Arora in their hometown Punjab. Soon later the family shifted to New Delhi where they have been currently residing together.

She attended the Guru Harikishan Public School after which she went on to join the Deshbandhu College, Delhi University from where she got graduated earning a degree.

Growing up, she was influenced by the Bollywood that she began modeling at an early age.

Who is Anjali Arora Dating?

Anjali Arora seems to be single at the moment. She has stated that she never had a boyfriend but was once molested by one of her classmates while they were in school.

Also, she revealed that her first crush was her middle school math teacher, and her current crush is Panjabi singer Jass Manak.

Anjali Arora has quite good earnings from her career as a social media personality, Instagramer, and YouTuber. Having her career started with her first lip-sync videos posted in 2019, she has managed to come a long way up appearing on several popular music videos and now even appearing on the popular reality TV show, "Lock-Up".

The sponsorship deals that she got through her Instagram have earned her quite a fortune which is estimated to be around $10 lakh. Also, she had once spilled her secret of taking 5000 rubles (INR 2,737) from her hotel's receptionist during her stay in Russia and going to a party.

How tall is Anjali Arora?

Anjali Arora is a beautiful lady with a well-maintained body physique in her 20s. She stands tall with a height of 5ft. 4inch. while her body weighs around 58kg. Her body measures around 35-29-36 inches with her fair face complexion with brown eyes and dark brown hair.

With her charming personality and heart-wrenching smile, she has managed to win several hearts all around India. Besides, she is an avid pet lover.

Trivias About Anjali Arora You Need To Know.