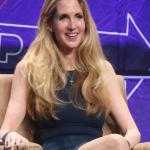 Ann Hart Coulter, popularly known as Ann Coulter is an American conservative social and political commentator, writer, syndicated columnist, and lawyer. She has become popular for her controversial speeches and thoughts. She is the author of 12 books and several of them are listed in the best-selling books by The New York Times.

Conservative commentator, Ann Coulter called herself a stupid girl on the Real Time Show. Speaking with the host Bill Maher, she lashed out at Trump over his signing of a bill that would temporarily open the government that did not include any money for his border wall. Bill Mayer, the host, called Trump a "lying con man", which Coulter agreed upon.

The harsh commentator, Coulter supported President but never steps down to criticize Trump about constructing the wall on the border.

Ann Hart Coulter was born on 8 December 1961. She was born to a father, John Vincent Coulter, and a mother, Nell Husbands Martin. Her father is of Irish-German descent. Her birth place is in New York City, New York in the United States. She holds American nationality and belongs to white ethnicity. She has two siblings, two brothers named James Coulter and John Coulter. Her zodiac sign is Sagittarius. She grew up in New Canaan, Connecticut in a conservative household with Republican parents.

She attended New Canaan High School, where she graduated in 1980.

She attended Cornell University, where she graduated with a Bachelor of Arts degree in history in 1984. She received her Juris Doctor from the University of Michigan Law School in 1988.

She started her career as a law clerk for Pasco Bowman II of the U.S. Court of Appeals for the Eighth Circuit.

She earned recognition as an outspoken critic of the Clinton administration in the 1990s.

She worked for the Senate Judiciary Committee in 1994. She handled crime and immigration issues for former Sen. Spencer Abraham.

In 1996, she was hired as a legal correspondent by MSNBC network, making it her first media appearance. However, she was fired for her controversial comments on different occasions.

She has also starred on CNN and Fox News.

In 1999, she was a regular columnist for George magazine.

A book, 'How to talk to a Liberal (If you must)', a collection of the columns written by her was published in 2004.

She has authored 12 books. Several of her books are featured on The New York Times Best Seller List including High Crimes and Misdemeanors: The Case Against Bill Clinton, Slander: Liberal Lies About The American Right, America!, Adios and In Trump We Trust.

She has also appeared on the Roast show.

She has appeared in the made-for-television documentary, Feeding the Beast, direct-to-video documentary, Fahrenheit 911, and Is It True What They Say About Ann?, all in 2004.

Ann Coulter is unmarried till date. However, she has been engaged several times. Her relationship ended before getting married. She has dated Bob Guccione, Jr., Dinesh D'Souza before 2007. She then dated Andrew Stein in 2007. But their affairs ended a couple of months later. She does not have any children.

She currently lives in West Palm Beach, Florida in the United States. She also owns a condominium in Manhattan and an apartment in Los Angeles.

The net worth of Ann Coulter is estimated at around $8.5 million, as of 2019. She is the author of several best-selling books.