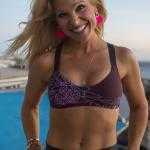 American television host, and travel, lifestyle, and fitness blogger Anna Kooiman, currently works for Network Ten in Australia, a branch of News Crop, as a substitute anchor and panelist. She had worked as a co-host for the network’s morning program ‘Fox and Friends First’ previously. A talented reporter, Kooiman has covered news about entertainment, weather, and local news in her career as an anchor. Apart from doing her job as an anchor, she was a former fitness instructor.

As a Fitness Instructor, Kooiman posed for the cover page of Carolina Health and Fitness magazine. She is active on social networking sites, Twitter and Instagram. More information on her can be found on Wiki and IMDb.

What is Anna Kooiman Famous For?

Where is Anna Kooiman from?

An American with Dutch heritage, Kooiman was born in Charlotte, North Carolina. Her parents Susan Kooiman and Wally Kooiman owned large businesses; Peppermint Forest Christmas Shop and Southeast Oasis Pool. She has an older brother, Michael Kooiman. Her parents still reside in Charlotte running the family business. Kooiman went to Myers Park High School where she used to play softball. A graduate of UNC at Wilmington, she was an athletic person since her high school days.

An athlete, Kooiman used to play softball during her high school. Due to her healthy exercising habits, she has got a flat-toned stomach. She likes spending time with her parents back in North Carolina. Along with this, she loves going to the gym and exercising. A lover of pets, she lives with her husband in a small apartment and her pet, a 100-pound Labrador retriever named Baxter.

At the age of 14, Kooiman got herself a job in her family’s Christmas store where she used to price ornaments in the warehouse. Nabbing her first job as a sideline reporter for Fox Sports, Kooiman entered the journalism field during her early college days back in 2004. She graduated from UNC- Wilmington as a Communications major. After that, she began to work as an intern for WWAY-TV in 2005. She joined the local NBC affiliate WNWO in the year 2007 as a reporter and an anchor. Her franchise reporting in WNWO as a partnership with US Marshals was worth noticing. Charlotte native Kooiman was sent to her hometown as a reporter for the then Fox network WCCB in 2008. Together with co-host Mark Mathis, she hosted the show, News Rising’. Her experience in the network for three years was as productive as she gained knowledge regarding the reporting stuff from her fellow host, Mathis. In 2011, she got a position in the network’s New York office. Her main priority is to host the weekend morning show ‘Fox and Friends Weekend’.

She also served as the anchor of the Fox Channel's All American New Year. Her program "Roadtrip with Anna Kooimn", brought viewers to various American locations while crossing off bucket list items. She served as the host and contributor for multiple Fox News Channel New Year's Eve specials that were broadcast worldwide.

In September 2016, Kooiman and her husband moved to Sydney in order to start a family. Currently, she works as a substitute anchor and panelist on News Crop's Australian division Network Ten.

Additionally, Kooiman launched her online fitness business, "Strong Sexy Mammas", for moms/mums in 2019. The business is headquartered in Sydney, Australia. In addition to occasionally offering online sessions through Strong Sexy Mammas, Kooiman instructs a half dozen live classes each week at boutique fitness studios in Bondi Beach. The main purpose of Strong Sexy Mammas is to provide ladies with fitness education and video on demand.

Who is Anna Kooiman's husband?

Anna Kooiman is a married woman. On February 8, 2015, she got engaged to her long-term boyfriend, Tim Stuckey, an Australian man, when they were on a personal vacation to Australia. Later on that year, the couple held their marriage ceremony at Manhattan's Central Park Loeb Boathouse on 31st July. The couple shares two children together, her first child was born in January 2018, and her second was in May 2020. As of now, they are still together, and no sign of divorce at all. There are no additional records of her previous or current relationships, either.

How tall is Anna Kooiman?

Anna Kooiman stands at a decent height of 5 feet and 9 inches and weighs around 61 kg. She has a well-shaped figure of 38-25-36 inches. Her dress size is 4(US), and her bra size is  36B. Her eyes are brown in color and she has blonde hair. Her sexual orientation is straight.

What is the Net Worth of Anna Kooiman?

Multi-faceted Anchor Kooiman has assembled a net worth of around $ 4 million and her annual salary amounts to $350k. She has accumulated such an amount from her job as an anchor working with multiple news channels. She also takes an extra amount as her pay while working as a fitness instructor.