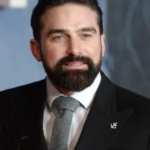 Anthony Middleton is a British adventurer, writer, television personality, and former soldier and marine who is well-recognized to be the former Chief Instructor on the Channel 4 television series, "SAS: Who Dares Wins". He remained on the show for 6 years from 2015 to 2021.

He also appeared as the Captain in the adventurous reality-show, "Mutiny" and the survival show, "Escape".

Middleton even has climbed Everest for the TV show, "Extreme Everest with Ant Middleton" which he succeeded on 14 May 2018, over a five-and-a-half-week period. In November 2019, Middleton was appointed as Chief Cadet and Honorary Captain in the Royal Navy’s Volunteer Cadet Corps.

Besides, he was dropped by Channel 4 last year over different 'views and values' which included commentary on social media about Covid and Black Lives Matters protests.

What nationality is Ant Middleton?

Ant Middleton was born on September 22, 1980, in Portsmouth, Hampshire, England. His birth name is Anthony Middleton. He holds British nationality. His ethnicity is White while Virgo is his zodiac sign.

Born in Portsmouth, Hampshire, Ant was brought up in France where he spent some time of childhood with his three brothers. He had a troubled relationship with his mother after his father, Pete Davidson died at age of 36 from a heart attack. Ant was just 5 years old when his dad died and his relationship with his mum started to become strained.

He revealed that he did not like his mum's new boyfriend who was very strict and would not think twice about using violence to keep the house in order.

Ant and his brothers never had experienced such treatment as they weren't even allowed to go to their dad's funeral as if he never existed making his death absolute.

Who is Ant Middleton's wife?

Ant Middleton is a married man and has been married to his only wife Emilie Middleton. The couple met in 2004 at the Essex bar where Emilie was working and fell in love at a first sight. His wife, Emilie even has said;

“He was so cheeky and funny, as well as good-looking and muscular, and I knew he was The One".

After dating for two years, the couple got married in May 2006 in Antigua and has been together for over 15 years now. Ant even has admitted that his wife was the one who kept the family going when he was deployed to Afghanistan.

The couple welcomed their first child together, daughter Shyla, in September 2007, followed by son Gabriel in 2009, the youngest daughter, Priseis in 2015, and son, Bligh in 2016. The family of 6 including one son, Oakley Middleton from his previous relations lives happily together.

Ant also has family in Australia where his brother Pete and three nieces reside. In April 2022, he raised funds to support Ukraine.

How much is Ant Middleton's worth?

Ant Middleton has earned a handsome sum of money from his profession as a television personality. Also his career as a former soldier and marine, and a writer, he surely has managed to mass a healthy fortune with his high posts in the army and selling books that were Number 1 Sunday Times best-seller.

Including his income and earnings, he has a net worth is estimated to be around $4 million.

Ant Middleton is a handsome man with a well-maintained athletic body physique in his early 40s. He has a fair complexion with brown hair and a pair of brown eyes.