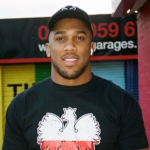 Anthony Oluwafemi Olaseni Joshua is a British professional boxer who is excellently known as Anthony Joshua. He is a two-time unified heavyweight champion and a winner of silver at the 2011 World Amateur Championships in the super heavyweight division. Having turned professional in 2013, Anthony holds WBA (Super), IBF, WBO, and IBO heavyweight titles since December 2019. He previously held the unified heavyweight championships from 2016 to June 2019. He is also the first British heavyweight to win both a gold medal at the Olympics and a world title. Additionally, Anthony is ranked as the world's third-best active heavyweight by BoxRec as of October 2021.

What is Anthony Joshua's nationality?

Anthony Joshua took birth on 15th October 1989 in Watford, Hertfordshire in England. His birth name is Anthony Oluwafemi Olaseni Joshua and his nationality is British. He came from a mixed ethnic background as he has Nigerian ancestry on his mother's side. While, on his father's side, he is of Nigerian and Irish descent. Similarly, his religious belief is in the Christian religion and his race is black. Anthony has celebrated his 32nd birthday as of 2021 and as per his birthdate, his zodiac sign is Libra. He was born to a father, Robert Joshua, and a mother, Yeta Joshua. He has 4 siblings, Janet, Jacob, Loretta, and Nikita.

Talking about Anthony's education, he spent some of his early years in Nigeria, where he attended a boarding school in Ikenne, Mayflower School. His parents divorced when he was 12 years old. Following his parents' divorce, he returned to the UK and attended the Kings Langley Secondary School. He grew up in Garston, Hertfordshire. He excelled at football and athletics in school, having broken his school's Year Nine 100 m record with a time of 11.6 seconds.

Anthony was accused of racism for his speech at a Black Lives Matter protest in Watford in June 2020, where he said "show them where it hurts, abstain from spending your money in their shops and economies, and invest in black-owned businesses." This was interpreted by some as a call to boycott white businesses. In response, he said the speech was not his own and that he had only read it out on behalf of a friend. He also said, "If you think I'm a racist, go fuck yourself."

Anthony Joshua was put on remand in Reading Prison in 2009. Upon release, he was ordered to wear an electronic tag. He was charged with possession with intent to supply a class B drug after he was found with eight ounces of herbal cannabis when police pulled him over in March 2011. He pleaded guilty and was suspended from the GB Boxing squad and a 12-month community order and 100 hours of unpaid work.

Does Anthony Joshua have a wife?

Anthony Joshua is an unmarried man. He is a father of a son named Joseph Bayley Temiloluwa Prince Joshua with his former partner Nicole Osborne. Their son was born in October 2015. Joshua was also rumored to be dating supermodel Bella Hadid in 2017. However, neither of them confirmed their relationship. Anthony spoke about his positive relationship with his longtime promoter Eddie Hearn in 2020, who has promoted him since his professional debut in 2013, saying that he "and Eddie will always have a great friendship." Talking about his sexual orientation, he is straight.

Anthony Joshua is one of the most popular boxers of this generation as he is also one of the highest-paid athletes in the world and earns over $50 million per year. He has a net worth of $80 million as of 2022. Anthony reportedly earned $100 million from his revenge match against Ruiz in December 2019. Besides fighting, his income comes from contracts and endorsements. As well, he has sponsor deals with Under Armour, Sky Sports, BXR, Texo Scaffolding, Beats, Lynx, Jaguar, EQ, StubHub, and Lucozade Sport among others. His net worth is estimated at $90 million at present.

Anthony Joshua stands at a tall height of 1.98 m i.e. 6 feet and inches tall and his body weighs around 249 lbs i.e. 113 kg. He has an athletic body build with 39-37-18 inches of body measurements. He has a reach of 2.08 m i.e. 82 inches. His eye color is dark brown and his hair color is black. Anthony also has a tattoo of the continent of Africa on his right shoulder, with the territory of Nigeria outlined, and says he feels a strong connection to his Nigerian roots.

Trivias About Anthony Joshua You Need To Know.