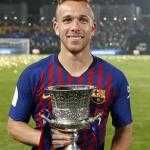 Arthur Henrique Hernandez Ramos de Oliveira Melo, professionally known as Arthur Melo or Arthur is a Brazilian football player. He plays for the Spanish club, Barcelona and the Brazilian national team. He plays in the midfielder position. He began his professional football career from Brazilian club, Gremio. His performance for the Gremio established himself as one of the strong prospects. English club Chelsea, and Spanish clubs, Barcelona and Atletico Madrid showed interests on him. In the end, Barcelona signed him for 31 million Euro in 2018. He made his senior debut for Brazil in 2018.

Arthur Melo was born on 12 August 1996. His birth name is Arthur Henrique Hernandez Ramos de Oliveira Melo. He was born to a father Ailton de Melo, and a mother, Lucia de Melo. His birthplace is in Goiania in Brazil. He holds Brazilian nationality. His zodiac sign in Leo. He has a brother named Paulo Henrique. Melo. Information regarding his education is currently unavailable.

Arthur began his youth career from the local club, Goias in 2008.

Gremio representatives spotted him in a youth tournament and signed him to the club's youth system in 2010.

Arthur played for the Gremio's youth system till 2015.

Following his impressive performance for the youth team at the Copa Sao Paulo de Futebol Junior, he was promoted to the club's first team by then-manager, Luiz Felipe Scolari.

He made his career first-team debut against Aimore. He played the first half and was substituted at the half time.

He later did not make any senior appearances throughout that season.

He made his league debut for the club in the last match of the season in 2016 against Botafogo. He came on in as a substitute replacing Kaio in the second half.

He made regular appearances for the first team in the 2017 season.

He scored his career-first professional goal against Fluminense at the 2017 Copa do Brasil in May.

He scored his first league goal against Vitoria in July.

Barcelona signed him from Gremio for an initial fee of 31 million Euro plus 9 million in added variables in March 2018. Barcelona made an official announcement on 9 July 2018 that they signed Arthur for a six-year contract.

He made his Barcelona debut in a pre-season friendly against an English club, Tottenham Hotspur in July 2018. He scored his debut goal for Barcelona in the same match.

Arthur Melo has represented Brazil U17 national team at the 2013 South America U17 Football Championship.

2017 Campeonato Brasileiro Serie A Team of the Year.

The young midfielder is unmarried at present. However, he is reportedly dating a girl named Kella. Not much information regarding his affairs is available. He has managed to keep his personal life private. Moreover, he is focused on his career.

The Brazilian midfielder stands at a height of 1.71 m i.e. 5 feet and 7 inches tall. He has an athletic body build. He has brown eyes and his hair color is also brown.

The net worth of Brazilian midfielder is under evaluation. His salary at Barcelona is currently unavailable. Barcelona signed him from Gremio for an initial fee of 31 million Euro plus 9 million Euro in added variables in March 2018.