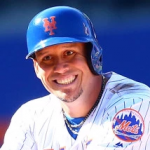 Asdrubal Jose Cabrera, one of the famous professional baseball player is popularly named as Asdrubal Cabrera who plays for Philadelphia Phillies of Major League Baseball. He is well known Venezuelan celebrity. He is famous for contribution to professional life. Previously, he played for Cleveland Indians, Washington Nationals, Tampa Bay Rays and many more. Currently, he is playing in the Philadelphia Phillies Team. He is best in bats at switch position and throws in the right position. He is a very talented baseball player.

Passionate and enthusiastic baseball player, Cabrera was born on 13th November 1985. He was born and raised in Puerto la Cruz, the city of Venezuela. His full name is Asdrubal Jose Cabrera. He is the son of Asdrubal, a truck driver and Zunilde, a homemaker. His nationality is Venezuelan. His astrological sign is Scorpio. At the very small age of three, he began his career with baseball.

Cabrera has got a great personality. Talking about his body, his height is 1.83 m. His weight is of 93 Kg. He has a balanced body with good health. He has an attractive body figure. His smiling face and charming personality have helped him to gain the attention of all the viewers.

Cabrera is a married man with Lismar, his school girlfriend. They married in the year 2007. They seem to be very happy with each other. The couple makes public appearances together often. There is no any sign of Separation between them. They are living peacefully. The couple is blessed with a son named Meyer and a daughter named Ashley.

The net worth of Cabrera is estimated to have $10 million as of 2018 with all of his properties and incomes. He is receiving an annual salary of $8,250,000 from his present club. This excellent player makes good money from his work. He is satisfied with his earning.