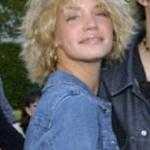 Ashley Ellerin was an American fashion student. She was murdered on 21 February 2001 by a serial killer Michael Gargiulo, nicknamed as "Hollywood Ripper". She was stabbed 47 times. She was 22 years old and was dating American actor Ashton Kutcher around the time of her murder.

What was Ashley Ellerin Famous For?

- Murdered by a serial killer, Michael Gargiulo, aka "Hollywood Ripper" in February 2001.

When was Ashley Ellerin Born?

Ashley Ellerin was born in 1979. She was originally from Los Altos, California. She held American nationality. Information about her parents and siblings are not available.

She grew up in small Silicon Valley town of Los Altos, where she attended Los Altos High School. She was active in water polo and swimming at high school.

She later moved to Los Angeles to pursue her career in fashion. She was attending the Fashion Institute of Design and Merchandising (FIDM) in Los Angeles. She also took classes at UCLA.

She worked as a makeup counter employee by day and as a stripper at the club Cheetah's in Las Vegas by night, according to the book, "The Hot One" A Memoir of Friendship, Sex, and Murder", written by her childhood best friend, Carolyn Murnick.

Ashley was neighbors with Michael Gargiulo. They were friends as well. Garguilo became close with Ashley by acting as her air-conditioning repairman. Becoming uncomfortable with Gargiulo, Ashley's friends suggested Ashley to stop hanging out with Garguilo. Garguilo seemed obsessed with Ashley. And Garguilo was spotted at her house several times when Ashley was not at home.

Ashley Ellerin was dating American actor Ashton Kutcher. They two had plans to attend a Grammy Awards after party on 21 February 2001. Ashton called Ashley several times. But, Ashley did not respond to his call. Ashton then went to her apartment. Aston looked through the window on her apartment. He saw what he thought was spilled wine on the floor. And Ashley didn't answer the door. The following day, her roommate found her dead. It was actually Ashley's blood on the floor. She had been stabbed 47 times. An autopsy showed that her injuries included a neck wound that nearly severed her head, and deep punctures to the chest, stomach, and back that in some cases were up to six inches deep. According to detective Tom Small, one stab wound penetrated the skull and took out a chunk of the skull like a puzzle piece.

Santa Monica Police Department arrested Gargiulo on 6 June 2008. Media dubbed him as the "Hollywood Ripper" as well as the "Chiller Killer".

He is being held at Los Angeles County Jail. His pre-trial was held in June 2017 in Los Angeles Superior Court. His trial was scheduled to begin in October 2017.