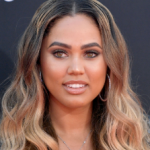 Ayesha Curry is a Canadian-American actress and Chef who rose to fame for being the wife of a basketball player Stephen Curry. Apart from that, she has own show named Ayesha’s Homemade which airs on Food Network. Additionally, Ayesha has appeared in several movies and TV Shows like Hannah Montana, Whittaker Bay, Love for sale to name a few. Today, let's discover the facts related to Ayesha Curry wiki, bio, career, and net worth.

What is Ayesha Curry known for?

Where was Ayesha Curry born?

Back to her early life, Ayesha was born in Toronto, Ontario, Canada as Ayesha Disa Alexander. She is of Canadian-American nationality and part of the mixed ethnicity with African-American, Polish and Chinese-Jamaican descent. Her birth sign is Aries. Ayesha is the daughter of Carol Alexander and John Alexander and shared her childhood with her four siblings named, Janice, Maria, Chad, and Jaz.

When did Ayesha Curry pursue her TV career?

Ayesha started her TV career at the age of 12 when she acted in Seven Thomas’s music video ”Too Young for love.” Later, she made her first appearance in the TV on Dan’s Detour of Life as Cassie Stevens in 2008. Following that movie, Ayesha featured in the TV series, Ten Items or Less, Love For sale, and Hannah Montana.

Ayesha was always passionate about cookery and her husband Stephen encouraged her to follow her dreams. Then, she created a YouTube Channel named Ayesha Curry where she uploads cooking tips as well as lifestyle tips and has around 545k subscribers on her channel. Later in 2016, Ayesha appeared in TV Shows like Chopped Junior and Guy’s Grocery Games. In the same year, Ayesha collaborated with the chef Michael Mina and released her book about cooking named, “The Seasoned Life.”

Ayesha has her show Ayesha’s homemade 1 and two which aired on Food Network. She became the presenter in 2017 of the TV Show The Great American Baking Show in 2017 but later left the show after its first season.

Does Ayesha Curry have a husband?

Reflecting her private life, Ayesha is a lucky girl who met her future husband during her high school days. The couple first met at a church youth group and bonded right away. Ayesha and Stephen were both in their teens and have been together since then. The couple dated for eight years and decided to tie the knot in 2011 and got married on 30th July in a ceremony surrounded by the loved ones.

In July 2012, Ayesha and Stephen were blessed with their first kid, a daughter in 2012; they had a son in 2018. Ayesha revealed in an interview that the key for their successful relationship is to put your partner ahead of everyone.

How much is Ayesha Curry net worth?

Ayes Curry currently has an impressive Net Worth of $16 Million dollars. This a culmination of her acting salaries, her company profits, and her guest appearances. The woman deserves a round of applause for her ambition, her achievements, and her surprising net worth. However, her salary is yet to be disclosed. In the case of disclosed, we will let you know.

How tall is Ayesha Curry?

Observing her body statistics, Ayesha stands tall with a height of 5 feet and 8 inches and weighs around 55 kgs. She has a body measurement of 34-28-38 inches and has black curly hair with dark brown eyes. Further, her bra size is 34B while her shoe size is 10 (US).

Trivias About Ayesha Curry You Need To Know.