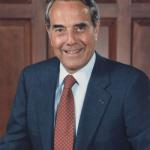 Robert Joseph Dole, famous as Bob Dole, was an American politician and attorney who represented Kansas in the United States Senate from 1969 to 1996. Bob also served in the United States House of Representatives from 1961 to 1969 for 27 years. During the final 11 years of his tenure, he was the Republican Leader of the Senate. He also had won the Congressional Gold Medal on January 17, 2018. Throughout his life, he wrote several books including his autobiography "One Soldier's Story: A Memoir". Besides, he was also active on the social media platform with around 35.6k followers on his verified Twitter account: @SenatorDole

What was Bob Dole famous for?

What did Bob Dole die from?

Bob Dole passed away on December 5, 2021, at the age of 98. He died of complications from the disease in his sleep at his home in Washington DC. Several politicians paid tribute to him after his death including US president Joe Biden who issued an order for flags to be flown at half-staff through December 11, 2021, with House Speaker Nancy Pelosi and Senate Majority Leader Chuck Schumer.

Later, Bob was interred at Arlington National Cemetery. Previously in 1991, he had surgery for prostate cancer. At the age of 77, he was treated for an abdominal aortic aneurysm by the surgeon, Kenneth Ouriel. He was hospitalized with pneumonia after undergoing knee surgery in February 2010. It was announced that he had been diagnosed with stage four lung cancer in February 2021 following which he experienced immunotherapy.

Where was Bob Dole born?

Bob Dole was born on July 22, 1923, in Russell, Kansas, United States. His birth name was Robert Joseph Dole. He held an American nationality. His ethnicity was White while his zodiac sign was Cancer.

He was born as the son of Bina M. Dole(mother) and Doran Ray Dole(father). His father used to run a small creamery. Bob was raised in a house at 1035 North Maple in Russell. He did his schooling at Russell High School. Later, he attended the University of Kansas. During his high school days, he was a high school athlete and was also offered to play for the Jayhawks basketball team by the Kansas basketball coach, Phog Allen. He played for KU's basketball team, the track team, and the football team.

He also joined the University of Arizona in Tuscon from 1948 to 1949. He then moved to Washburn University where he completed his undergraduate and law degrees in 1952. In the year 1942, he became the second lieutenant in the Army's 10th Mountain Division after joining the United States Army's Enlisted Reserve Corps during World War II.

During the war, he was seriously wounded by a German shell that struck his upper back and right arm. He was paralyzed from the neck down and transported to a military hospital near Kansas. In 1947, he was medically discharged from the Army as a captain.

How many times was Bob Dole married?

Bob Dole had been married twice throughout his life. At the time of his death, Bob was married to his second wife, Elizabeth Halford. The couple tied the knot on December 6, 1975. The couple together had no children. Previously, he was married to his first wife, Phyllis Holden. Holden was an occupational therapist at a veterans hospital. The couple tied the knot in 1948 after three months of their first meeting. The couple was blessed with a daughter, Robin who was born on October 15, 1954. However, the couple got divorced on January 11, 1972. Later on April 22, 2008, Holden passed away. Bob also was a Freemason and a member of Russell Lodge No. 177, Russell, Kansas.

Bob Dole had earned a good amount of money from his profession as a politician and attorney. Having started his political career in 1950, he had come a long way representing Kansas in the United States Senate from 1969 to 1996. Throughout his career, he served the nation in several respected posts including the Kansas House of Representatives, the chairman of the Republican National Committee, and the chairman of the Finance Committee. Including all of this, Bob had a whooping estimated net worth of $40 million.

Bob Dole was a handsome man with an average body physique in his late 90s. He had a fair complexion with black hair and a pair of brown eyes. He stood tall with a height of 5ft 9inches(1.8m) and had a bodyweight of 80kg.