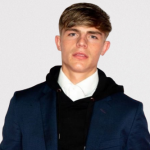 Brandon Paul Brian Williams is an English professional football player who plays for Premier League club, Norwich City, on loan from Manchester United as a full-back. He started playing football for the youth team of Manchester United in 2017 and began his career at the club. He made his first-team debut on 25 September 2019 as a substitute in an EFL Cup match. He made his Premier League for the club on 20 October 2019. On 23 August 2021, he joined Norwich City on loan for the duration of the 2021-22 season. He made his debut for the club on 28 August 2021.

What is Brandon Williams famous for?

What nationality is Brandon Williams?

Brandon Paul Brian Williams was born on 3 September 2000. His birthplace is Manchester, England. Detail about his parents has been kept secret and has not been disclosed yet. He grew up in the Harpurhey area where he would attend a nearby secondary school Co-op Academy Manchester. He holds English nationality. He belongs to the white ethnicity. His horoscope sign is Virgo.

Who does Brandon Williams play for?

Brandon Williams earns from his professional career as a football player. His income is from contracts, salaries, bonuses, and endorsements. As of 2022, his estimated net worth is €5 million and his salary is £2.2 million. His market value is around €10 million.

Who is Brandon Williams' girlfriend?

Looking at his personal life, the English star is not single. He is currently in a romantic relationship with his girlfriend, Shanice Easty. They reportedly grew up in the same neighborhood in Manchester, England. They both completed their higher studies in the same high school, and there they started their early love affair. He had shared photos of the beautiful moments he had with his girlfriend celebrating her birthday on his social media accounts. Any updates on his love life will be updated here soon.

What height is Brandon Williams?

Brandon Williams stands at a height of 1.71m i.e. 5 feet and 7 inches tall. He has a bodyweight of 63kg. He has an athletic body build. His eye color is blue and his hair color is brown. His sexual orientation is straight. His other body measurement such as chest size, biceps size, and waist size is still got to get revealed yet. Overall, he has got a healthy body.