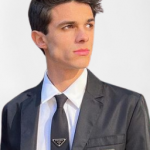 Brent Rivera is an American Youtuber and actor. He has also established himself as a top-rated social media personality. He is one of the most popular and most followed TikToker in the world with 42.4 million followers and 1.3 billion likes. He has 22.1 million followers on his Instagram account @brentrivera.

Brent was also extremely popular on Vine, where he earned over 8 million followers till the app's permanent shutdown in 2017. He co-founded the digital content group Amp Studios and has been serving as the CEO of the brand. His youtube channel @Brent Rivera has gained 17.3 million subscribers to date.

What is Brent Rivera famous for?

Where is Brent Rivera from?

Brent Rivera was born on 9th January 1998 in Huntington Beach, California, the US. Her birth name is Brent Austin Rivera. He holds American nationality and belongs to the Latino ethnicity. His birth sign is Capricorn. He is a follower of Christianity.

Brent Rivers was born into a middle-class family. His father John Rivera works as a firefighter while his mother Laura Rivera is a teacher. He grew up along with his two brothers, Brice and Blake, and one sister, Lexi who is is also a social media personality. He was interested in acting since his childhood.

Rivera completed his schooling at Huntington Beach High School, a local high school in his hometown Huntington Beach. After graduation, He attended the Long Beach State University of California for further education.

Who is Brent Rivera dating?

Brent Rivera is currently dating his girlfriend, Pierson Wodzynski. Just like Rivera, Pierson is also a popular American TikToker and a well-known social media personality, and also a photographer too.   Brent Rivera first met Pierson in December 2019 and after developing a close bond and friendship, they started dating in early 2020.

The pair soon collided and started working together and appearing frequently on his youtube channel, leading their fans to speculate that they had become a couple. However, Rivera has been telling that he and Pierson are just close friends but were soon found kissing each other. And after that, the rumors were sparked that they were dating each other.

Previously, Brent dated Morgan Justus a California-based singer, songwriter, and model in 2017. He was rumored to have had a brief romance with another social media sensation, Eva Gutowski in 2019.

What is Brent Rivera's net worth?

As of February 2022, the net worth of Brent Rivera is estimated to be the US $15 million. His main income sources include his youtube earnings and his acting career. With monetized YouTube channels earning $3 to $7 for every one thousand video views, Brent's channel is predicted to generate $186,000 in ad revenue each month i.e. $2.79 million annually.

Apart from google ads, Brent also generates extra income from YouTube Red viewers and through brand deals on his Instagram account from companies like Colgate. As an actor, he earns around $100 thousand per year.

How tall is Brent Rivera?

Brent Rivera is 5 ft 10 inches tall and his body weight is around 70 Kg. He has a slim and lean body with an attractive face. His body measures 44-32-38 inches. His biceps size is 14 inches. He has a pair of brown eyes. The Youtuber looks handsome in his slick back with a flowing hairstyle that is black in color. He feels comfortable wearing 10(US) size shoes.