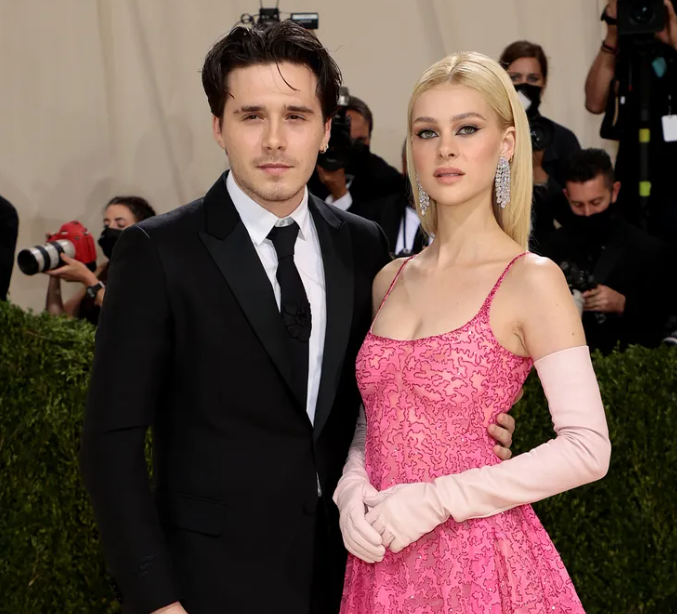 The 23-years old, Brooklyn Beckham is a model, actor, author, social media personality as well as a renowned photographer. Born on 4th March 1999 in Westminister, London, England; Brooklyn Beckham's born name is Brooklyn Joseph Beckham. His father, David Beckham is a retired footballer, model, and businessman, and his mother, Victoria Beckham is a singer, fashion designer, and businesswoman. He grew up with his three siblings; Romeo James, Cruz David Beckham, and Harper Seven. He is the eldest son born to his parents. His nationality is British and his ethnicity is Mixed as he has English, Jewish and German descent. Pisces is her zodiac sign and her religion is Christianity. He played in the Arsenal F.C. Academy, but he left in 2015 after not receiving a scholarship to remain with the academy. He studied photography at Parsons School of Design in New York. As a child actor, he appeared in a TV documentary named Being Victoria Beckham in 2002. Later, in 2012, he appeared in the reality game show "Hell’s Kitchen". He first appeared as a model in Man About Town Magazine in 2014. Since then, he has modeled in editorials and covers for Vogue China, Miss Vogue, Interview, L'Uomo Vogue, T: The New York Times Style Magazine, and Dazed Korea. He also photographed a campaign for Burberry BRIT, starring models Ben Rees, Carvell Conduah, Eliza Thomas, Liv Mason Pearson, and Maddie Demaine. At present, he is a member of Arsenal. In June 2017, he released a book named "What I See". He has been the face of Huawei Honor 8 Android phones alongside Scarlett Johansson, Karlie Kloss, and Henry Cavill. In 2021, it was revealed that Beckham was to try his hand at becoming a professional chef. As of 2022, the net worth of Brooklyn Beckham is estimated to have $10 Million as of 2022. 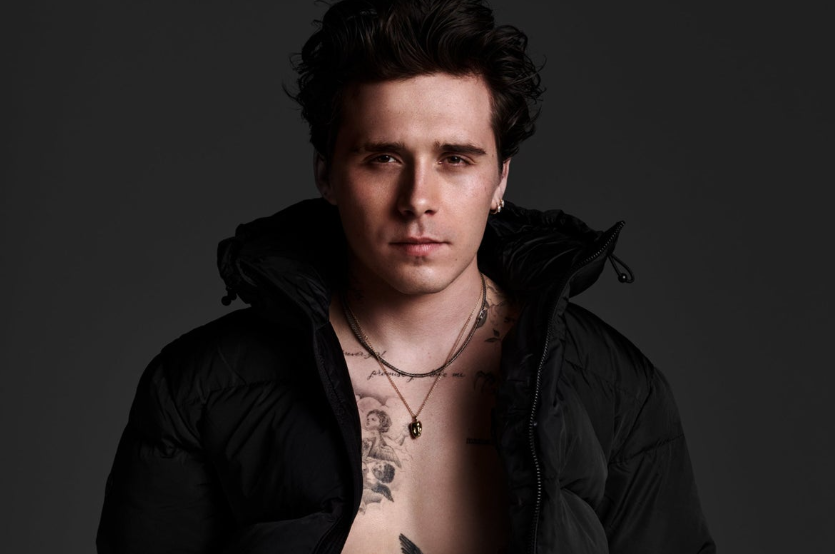 The 27-years old, Nicola Peltz is an American actress who is famous for her appearance in "The Last Airbender", "Bates Motel", and "Transformers: Age of Extinction". Born on 9th January 1995, Nicola Peltz's born name is Nicola Anne Peltz. She is from Westchester County, New York, the USA. She holds an American nationality. Her ethnicity is Mixed as she has Jewish (Austrian and Russian) ancestry on her father's side and is of Italian, German, Welsh, and English descent on her mother's side. She was born to her father, Nelson Peltz (billionaire businessman and former owner of Snapple brand), and her mother, Claudia Heffner (former model). She has seven siblings, 4 older brothers including Will Peltz and Brad Peltz, 2 younger brothers, and a sister. Her zodiac sign is Capricorn and she follows Christianity religion. She attended Rye Country Day School in New York. Nicola started her acting career as a child actress. She made her film debut as Mackenzie in the Christmas comedy film, "Deck the Halls" in 2006 which was followed by "Harold" in 2008. She got her breakthrough when she landed the role of Katara in the fantasy adventure film, "The Last Airbender" in 2010. After then, she got huge fame after starring in "Transformers: Age of Extinction" in 2014. Since then, she has appeared in movies such as Affluenza (2014), Youth in Oregon (2016), Back Roads (2018), and The Obituary of Tunde Johnson (2019). She made her TV debut in the main role of Bradley Martin in the A&E drama series "Bates Motel" in 2013. In 2020, she portrayed Felicity in the romantic comedy "Holidate". As of 2022, the net worth of Nicola Pelt is estimated to have $50 Million. 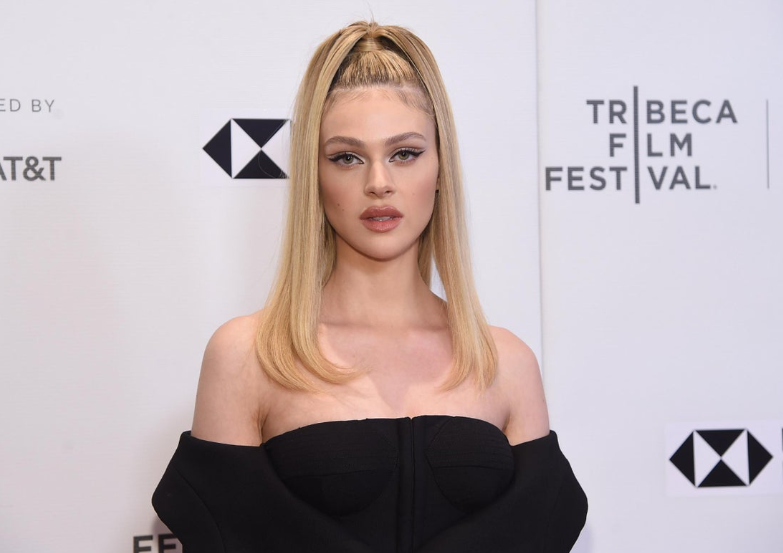 Everything To Know About Nicola Peltz

Brooklyn Beckham and Nicola Peltz got married on 9th April 2022, in Palm Beach, Florida, the USA. Nicola Peltz is four years older than Brooklyn. Let's know about their relationship timeline. 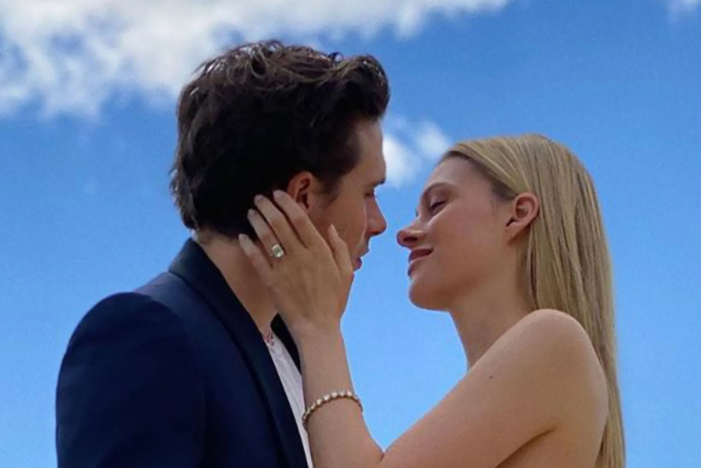 Brooklyn Beckham and Nicola Peltz were first linked in October 2019 after being spotted together at a Halloween party.

In January 2020, the couple make their relationship official on Instagram as Brooklyn posted a series of gorgeous snaps of his girlfriend, including one of the couples standing in front of a bathroom mirror.

Brooklyn and Nicola were spotted at celeb hangout Craigs in West Hollywood. Brooklyn celebrated his love's 25th birthday with an Instagram tribute. "Happy birthday babe xx," he wrote. "You have such an amazing heart xx."

They make an appearance at Paris Fashion Week together, looking loved up at the Saint Laurent show.

Following Beckham's sentimental tribute for Peltz's birthday, Peltz returned the favor for his birthday. She captioned it "beautiful heart." "happy birthday to the love of my life 🤍 you have the most beautiful heart I've ever known," she wrote alongside a pair of photos.

In July 2020, Brooklyn asks Nicola to be his bride! "Two weeks ago I asked my soulmate to marry me and she said yes xx I am the luckiest man in the world," he wrote on Instagram, alongside a photograph of him kissing Nicola. "I promise to be the best husband and the best daddy one day. I love you baby xx." Nicole Peltz wrote on Instagram, "you've made me the luckiest girl in the world. I can't wait to spend the rest of my life by your side. your love is the most precious gift. I love you so so much baby and thank you harper for this pic"

On 29th October 2020, Beckham and Peltz celebrated their one-year anniversary on Instagram. In the photo, the two can be seen cozying up to each other in the bathtub. Brooklyn wrote "Happy 1-year anniversary baby. I'm the luckiest person to have you by my side x I can not wait to grow old with you and start a family with you ❤️ love you so much ❤️❤️".

Brooklyn, wrote over his fiancée in an Instagram post shared in honor of her 26th birthday. "Happy birthday baby x I can not tell you how much I love you," he wrote. "You make me a better man and the happiest man in the world x I am so lucky to be able to spend the rest of my life with you and create so many memories. I hope you have the most amazing day because you deserve it xx love you baby."

Brooklyn wrote via Instagram "Happy Valentine’s Day baby x you are my best friend and I’m so happy I get to spend this special day with you". "I will forever be so grateful and the happiest man in the world to call you mine and will always make you smile because you have the most gorgeous smile."

Brooklyn wrote via Instagram "This exact day 1 year ago I asked this gorgeous woman to marry me". "She makes me a better person every day and is my best friend. I can’t imagine my life without you because you continuously make me laugh and smile x happy 1-year baby."

Brooklyn and Nicola appeared on the red carpet at the 2021 Met Gala on Sept. 13 in New York City. Peltz dazzled in a pink Marilyn Monroe-inspired Valentino gown and opera gloves, while Beckham was clad in a classic black tuxedo. "Honestly, it was the first dress I tried on and I loved it," Peltz told. Beckham added, "She tried this on and then I kind of ... I matched it. That's how it goes."

Brooklyn told, "We've been engaged for a year, and if Covid wasn't a thing we'd have liked to have been married already".

Brooklyn wrote, "Happy birthday to the most gorgeous woman in the world x I am the luckiest person in the world to be able to call you mine x i fall more in love with you every single day and I can not wait to grow old with you ❤️❤️".

"I proposed in the countryside in New York in Bedford. I filled [the gazebo] with a bunch of flowers - her favorite flower is peonies - a bunch of peonies flowers, candles, her favorite wine, come caviar", Brooklyn recalled during an appearance on The Late Late Show With James Corden of his proposal to Peltz. "I had the ring up there it was hiding behind some flowers. It was an amazing view of this huge river". When Brooklyn finally popped the question, he remembered Peltz crying. "I was like, Oh no!' Then she didn’t answer me for another five minutes. She kept crying. It was a little bit nerve-wracking", he said, noting she finally said yes.

Beckham and Peltz got married on 9th April 2022. The pair tied the knot at an elegant black-tie affair held on Peltz's family estate in Palm Beach, Florida. Their wedding was filled with friends and family of both the bride and groom, including Brooklyn's famous family - parents Victoria Beckham, David Beckham, siblings Romeo, 19, Cruz, 17, and Harper, 10 - and Nicola's family - her businessman dad Nelson Peltz, her model mother Claudia Heffner, and her seven siblings, including professional hockey player Brad Peltz and actor Will Peltz. Brooklyn and Nicola shared a sunset kiss at their wedding as well. 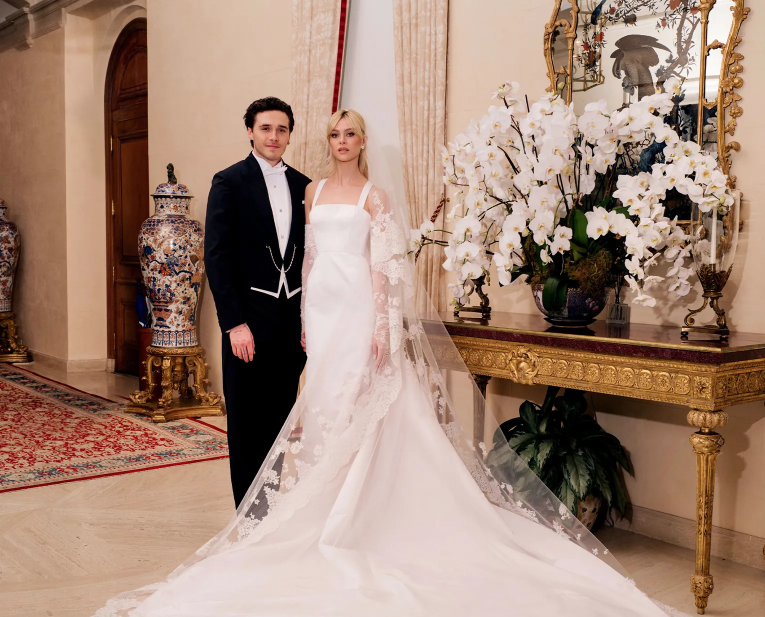 Who is Arianna Johnson? Are Sonya and Ariana still together?