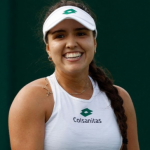 Camila Osorio is a Colombian professional right handed-tennis player who is ranked no.34 in singles and no. 477 in doubles by the Women's Tennis Association(WTA). Osorio also won a bronze medal in girls' singles and a silver medal in mixed doubles, alongside Nicolás Mejía at the 2018 Summer Youth Olympics. She is also known for being the granddaughter of former Colombian national team football player, Rolando Serrano.

What is Camila Osorio famous for?

Where was Camila Osorio born?

Camila Osorio was born on December 22, 2001, in Cúcuta, Colombia. She holds Colombian nationality. Her birth name is María Camila Osorio Serrano. Her ethnicity is mixed while Capricorn is her zodiac sign. She is of Spanish-Portuguese descent.

She was raised in her hometown, Cúcuta where she completed her high school education. Her grandfather is a former Colombian national team football player, Rolando Serrano. Born in a family with a sports background, she decided to pursue her career as a tennis player. So, she started taking tennis classes at a very young age and competed in several junior competitions.

Who is Camila Osorio dating?

How much is Camila Osorio's worth?

Camila Osorio has earned a good amount of money from her profession as a tennis player. She has participated in and won several competitions, also managing to earn the huge prize money of $710,366 at the very young age of 20. Including all of her earnings, Osorio has an estimated net worth to be around $1 million as of 2022.

How tall is Camila Osorio?

Camila Osorio is a beautiful lady with a well-maintained slim athletic body physique in her early 20s. She has a fair complexion with brown hair and a pair of brown eyes. She stands tall with a height of 5ft 4inches(1.63m) and has a bodyweight of 57kg. Her body measurement is 34-22-33 inches. Her bra cup size is 34B. She has no tattoos painted on her body.