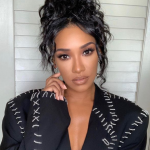 Candice Patton is an American actress and philanthropist. She is best known for her role as Iris West in the currently ongoing CW Television Series The Flash and also recognized for her recurring role in the BET television series The Game as Tori. She ranked 5th in the list of TV’s 100 Sexiest Women by BuddyTV in 2014. She also made it to the Maxim Hot 100 list, securing the 61st position in 2015. Let's know more about her, her career struggles through this article.

What is Candice famous for?

Where was Candice Patton born?

Recalling her early life, Patton was born as Candice Kristina Patton in Jackson, Mississippi, the U.S. Her parents are Paul Patton and Arianna Jackson. Her father was an engineer and a musician, while her mother was an actor who worked in theatres and musical dramas. They separated when she was just five years old.

Similarly, she is of Euro-Afro-American ethnicity and spent her early life and childhood in Plano, Texas and raised by her mother along with her brother, Adrian. Since her school days, she was interested in drama and acting and her family always supported her.

Where is Candice Patton go for education?

Concerning her education, Patton studied in Plano East Senior High School in 2003, and later attended Southern Methodist University in Dallas, graduating in 2007 with a BFA in Theatre.

When did Candice Patton pursue her acting career?

What are the achievements of Candice Patton?

Is Candice Patton married or not?

As per Jewel Harris, her husband JR Smith is in a relationship with her. Harris appears to confirm the accusations of a relationship between Smith and Patton in her highly emotional confessional video about his apparent cheating. But the exact information is yet to be disclosed.

How much is Candice Patton's worth?

Being an actress, Patton earns a decent amount of money and popularity throughout her profession in the field of the entertainment industry. Based on some online reports, her estimated net worth said to be $2 million at present. However, her annual salary is somewhere around $500 Thousand.

How tall is Candice Patton?

Observing her body physics, Patton stands a height of 5 feet 4 inches and weighs around 55 Kg. She has an athletic body with a pair of dark brown eyes and black hair color. Similarly, she used 34A bra size and 6 (US) dress sizes. Further, her body measures 35-24-34 inches.

Trivias About Candice Patton You Need To Know.