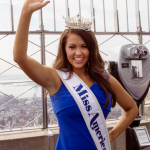 An American beauty pageant titleholder of Miss Northern Lights 2017, Miss North Dakota 2017, and Miss America 2018 is famed as Cara Mudd. She is an American Model, Dancer, Writer, and Speaker.

Cara was born on 8th December 1993. She was born in Bismarck, North Dakota, the U.S. Her nationality is American. Her father name is Doug Mund and her mother name is Delora Kautzmann Mund. She is graduated with honors from Brown University in 2016 with a degree in business, entrepreneurship, and organizations. She is a relative of Victoria Woodhull, the first woman to run for President of the United States. Her horoscope is Sagittarius and her religion is Christianity.

Net Worth of Cara Mund

Cara Mund is not married yet and still single. There is no any information about his boyfriend. Also, she has not spoken anything about her love life to the media.

Trivias About Cara Mund You Need To Know.