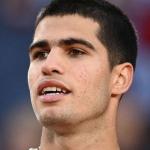 Carlos Alcaraz is a Spanish professional tennis player. A young star, he turned professional in 2018 and has already won five ATP Tour singles titles and reached the quarterfinals of the US Open and French Open. He won his first ATP Tour title, the Plava Laguna Croatia Open in 2021. He reached the career-high rankings at world No. 5 in singles in 2022 after he reached the final of the 2022 Hamburg Open. He also became the youngest player to enter the top 5 rankings since Nadal in 2005. Several former tennis players and analysts have projected Alcaraz as a future world No. 1.

As a junior, he reached world No. 22 winning two titles on the ITF Junior Circuit.

What is Carlos Alcaraz Famous For?

Where is Carlos Alcaraz From?

Carlos Alcaraz was born on 5 May 2003. His full name is Carlos Alcaraz Garfia. He was born in Villena in Spain. He holds Spanish nationality. His parents are Carlos Alcaraz Gonzalez and Virgina Garfia. He has three siblings, Alvaro, Jaime, and Sergio. His star sign is Taurus. He belongs to the Hispanic ethnicity and his religion is Christianity. He became interested in tennis inspired by his father who was a former professional tennis player and was among the top 50 tennis players in Spain.

Who is Carlos Alcaraz Girlfriend?

Carlos Alcaraz is not married. However, the young sensation is not single. He is dating Maria Gonzalez. His rumored girlfriend, Maria also plays tennis in Spain. More details about his personal life are to follow.

What is Carlos Alcaraz Height?

What is Carlos Alcaraz Net Worth?

Carlos Alcaraz earns from his professional career as a tennis player. His income comes from prize money, sponsorships, and endorsements. He has won over $6 million in prize money since the start of his professional career. He has sponsorship deals with Nike, Babolat, and Rolex. Nike sponsors his clothing and shoes whereas Babolat sponsors his racquets. His net worth is estimated at $2 million at present.