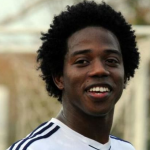 Carlos Alberto Sanchez Moreno is a Colombian professional footballer. Who is known as Carlos Sanchez Moreno. He plays as a defensive midfielder for  for Colombian national team as well as club Italian club, ACF Fiorentina(Loan from Aston Villa).He is nicknamed La Roca (The Rock), due to his strength on the pitch.

Sanchez Moreno was born on 6 February 1986 in Quibdo, Colombia. He is nicknamed La Roca (The Rock), due to his strength on the pitch. Sanchez is married to Noelia Polvoria, whom he met in Montevideo. They were having two chideren son  and daughter. He was intrested in Playing football for his early childhood. He began his football Journey entering the youth rank with Danubio officials in 2003.

Carlos Sanchez  spent his youth career with Danubio from 2003 to 2005.  He began his career at River Plate Montevideo before moving to Valenciennes in 2007. Then he signed to French club Valenciennes where he scored 10 goals in 178 appearances in six seasons. He later played in La Liga for Elche and Espanyol, the Premier League for Aston Villa and Serie A for Fiorentina.