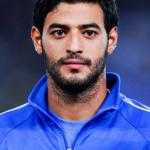 Carlos Alberto Vela Garrido professionally known as Carlos Vela is a Mexican professional footballer who captains and plays for Major League Soccer club Los Angeles FC. He is a versatile player who can play as a forward, winge, and attacking midfielder. His shirt number is 10.

Carlos Vela is a very talented football player. He started playing football for the youth team of Guadalajara where he caught the eye of various European clubs after finishing as the top scorer at the 2005 FIFA U-17 World Championship. He then played for Arsenal, Celta Vigo (loan), Salamanca (loan), Osasuna (loan), West Bromwich Albion (loan), and Real Sociedad. Currently, he is playing for Los Angeles FC.

On the international level, Carlos Vela has represented Mexico at various age levels. He has represented Mexico at U17, U20, and the senior level. He made his senior international team debut for Mexico on 12 September 2007. He participated in Mexico's CONCACAF Gold Cup victory in 2009 and participated in the 2010 FIFA World Cup in South Africa. He then rejected all subsequent call-ups for more than three years, including friendlies, World Cup qualifiers, and various major tournaments including the 2014 FIFA World Cup, citing various reasons for his refusals. In November 2014, after a three-year absence, he participated in Mexico's CONCACAF Gold Cup and CONCACAF Cup victory in 2015. He then participated in the 2017 FIFA Confederations Cup and 2018 FIFA World Cup. From 2007 to 2018, he made 72 appearances and scored 19 goals for Mexico.

Carlos Vela and Bob Bradley were named finalists for MLS Awards. Captain Carlos Vela and head coach Bob Bradley both earned distinctions on Tuesday as finalists for the end-of-year MLS Awards, which highlight the top talent and performances from across the league over the past season of play. Bradley is a finalist for the MLS Head Coach of the Year after his efforts in leading LAFC in its inaugural season. Vela, meanwhile, is nominated for two awards - the Landon Donovan MVP award and the MLS Newcomer of the Year.

When was Carlos Vela born?

Carlos Vela was born on 1 March 1989. His birthplace is Cancún, Mexico. His birth name is Carlos Alberto Vela Garrido. He holds Mexican nationality and he belongs to the white ethnicity. Likewise, his religion is Christianity and as per his birthdate, his zodiac sign is Aries. He was born to his father, Enrique Vela, and to his mother, Nella Garrido. His father, Enrique Vela had played semi-professional football but an injury caused by a torn ligament caused him to retire. About his sibling, he has an older brother named Alejandra Vela. His older brother, Alejandro, is a former professional footballer. Information regarding his education is currently unavailable.

Looking at his personal life, Carlos Vela is a married man. He got married to his long-term girlfriend, Saioa Canibano whom he met during his time at Real Sociedad. His wife, Saioa Canibano worked as a journalist for a local media outlet. They have been together since 2017. The couple is blessed with two children: a son named Romeo born on 19 November 2017 and a daughter named India born in October 2022. At present, he has an intimate relationship with his wife and children where they are living their life happily together.

Carlos Vela’s Net Worth and Salary 2022

Carlos Vela is a very successful footballer and his major source of earnings is from his football career. He is a Mexican professional football player who currently plays for Major League Soccer club Los Angeles FC. As of 2022, the net worth of Carlos Vela is believed to be around $20 million where he received £4.6 million as a yearly salary from his current club. Besides this, he even adds more amount to his earnings through endorsement and sponsorship deals. His major deal is reported to be with Adidas and can be seen supporting the brand by wearing the shoes in his games. Moreover, he lives in a very nice house in the West Hollywood area, for which he would have paid $ 4 million. Details about his cars is unknown at present. In addition, his market value is around €5 million. Overall, he is satisfied with his earnings and he is living a luxurious lifestyle from his earnings.

How tall is Carlos Vela?

Carlos Vela has got an athletic body shape. He stands at a height of 1.78m i.e. 5 feet and 10 inches tall. He has a bodyweight of 75kg. His eye color is brown and his hair color is black. His sexual orientation is straight. His other body measurement such as chest size, biceps size, and waist size is still got to get revealed yet. Overall, he has a very healthy body with an attractive body. He maintains his body a lot. With his glowing smile, he attracts a lot of people towards him.