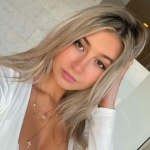 Carly Lawrence is a Canadian TV personality, model, and dancer from Toronto, Canada who is best known for her appearance on the 2nd season of the American-British reality television dating game show "Too Hot to Handle" which airs on Netflix. This season's first half got released on June 23, 2021, and the second half set will be released on June 30, 2021, each half consists of 4 episodes.

Carly is an eager, pleasant party girl who describes herself as a "Little bit of a man-eater". She is one of the most popular candidates on the show, and her lovely attitude and physical attributes have helped her achieve popularity.

What is Carly Lawrence famous for?

Where is Carly Lawrence from?

Carly Lawrence was born on May 31, 1997, in Toronto, Canada. Her birth name is Carly Lawrence. She holds Canadian nationality. Her ethnicity is White Caucasian while Gemini is her zodiac sign. She is Christain by religion. Carly was born in a well-to-do family in Toronto. Her parents are Canadian entrepreneurs. She did her schooling at a local school in Toronto.

Since her childhood, she was interested in dancing. So, she took many dance classes. She also started doing modeling at a young age. She has done modeling for several brands under Hayley Elsaesser, spot 6 management, and B&M model management.

Carly Lawrence Too Hot to Handle

Carly Lawrence rose to fame after being announced as a cast member of the 2nd season of the American-British dating game show "Too Hot to Handle" on June 15, 2021.

She is one of the most loved contestants of this season.

A group of young men and women relocate into a villa to spend time with one another in the show. However, they are not permitted to have intercourse, kiss, or engage in any kind of intimate activity. If they do, the $100,000 reward amount will be deducted.

Before her appearance in "Too Hot to Handle", she is a well-established model and dancer.

Who is Carly Lawrence dating?

Carly Lawrence is currently dating Joey Joy alongside whom she is appearing on the "Too Hot To Handle" show. They seem to be in a long-distance relationship since Joey lives in Miami and Carly lives in Toronto at the moment. However they went through several on and off-screen dramas as when Joey became a part of the second season cast in episode 6, Carly said, "I feel so happy when I'm with him."

The couple even got intimated and exchanged a prohibited kiss one night. They however said that they wanted to see each other towards the end of season 2, although they weren't an official pair yet.

There seemed to be drama when Carly visited Miami for a month from January to mid-February of 2021 where Joey lived and just after she left Miami it seemed that the couple broke up as Joey posted several breaks up posts including an Instagram caption that read, “Certified Lova boii” with a broken heart emoji.

The couple however has got together as Carly recently said, “I am seeing someone from the show. It’s Joey. “We dated and then we broke up because I’m crazy, and now we’re rekindling things, we’ll see how it goes.”They even got matching flame tattoos on their pinky fingers.

Carly also described herself as a "man-eater" and declared that she had no interest in finding the perfect mate in an interview with People Magazine ahead of the debut of "Too Hot To Handle." She also stated that when she's evaluating men, the most important quality she looks for is someone who would be a great hangout for the night (via Bustle.)

She is on the show for her own purposes, which have nothing to do with finding love. She prefers to go about her business her own way, and she isn't looking for her husband or herself for the rest of her life. She just cares about two things: winning and having a good time. She has, however, been seen on Too Hot to Handle doing romance with participant "Chase DeMoor."

Besides, she loves to travel to adventurous places with her friends. She is a dog lover and owns a pet dog.

Carly Lawrence has quite good earnings from her professional career as a TV Personality, model, and dancer. Having her career started as a model, Carly has managed to come a long way up becoming one of the contestants on the 2nd season of "Too Hot to Handle". Her source of income is surely her modeling contracts and her TV appearance. Including all her earnings, she has an estimated net worth of $200k as of 2021.

She also earns additional income from her endorsement deals with renowned brands. She makes extra money on the Onlyfans website, where she charges $9.99 each month, and she keeps track of everything on officialcarly.com.

Carly Lawrence is a beautiful lady with a well-maintained hourglass body physique in her mid-20s. She stands tall with a 5ft 8inches(1.72m) height while her body weighs around 51kg(112 lbs). She has her own bold personality which can be certain through her body features with blonde hair, hazel eyes, and body measurement of around 35-26-36 inches with a bra size of 35B. She also enjoys tattoos and has six on her body, including a butterfly on her fingers. Her nose and ears have been pierced.