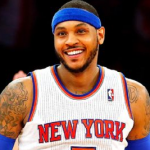 He was born in 29th May, 1984. He was born and raised in Brooklyn, city of New York. His full name is Carmelo Kyam Anthony. By profession, he is a Basketball player. He is the son of Carmelo Iriarte and Mary Anthony, his parents. His nationality is American. He belongs to black ethnicity. He was the youngest one among his siblings named Robert, Wilford, Late Michelle and Daphne. He had to bear the loss of his father at an early age of two due to cancer. He had completed his education from Syracuse University. On 29th May, 1984, he began his career in basketball player in Red Hook, New York City. His Horoscope sign is Gemini.

Early and Recent Career of Carmelo

Carmelo Anthony began showing interest in basketball at an early age, while he was attending Towson Catholic High School. He became one of the top players in the area when he gained height of success in the summer of 1999. He was transferred to Oak Hill Academy to improve his grades. At that time, Carmelo not only upgraded his grades but his skills advanced as well. Soon, he became one of the highest ranked high school basketball player in the country. He got enrolled at ‘Syracuse University’ and quickly adapted to the college game. His skills led the club to its first ever ‘NCAA tournament title’ in 2003.

On June 26th, 2003 professional basketball player, Anthony began his career. He was also chosen as 3rd player in the 2003 NBA by Denver Nuggets and he made season debut in winning score of 80-72 against San Antonio on October 29, 2003. Anthony became the third youngest player reaching 2000 career points on the date of December 4, 2004. In 2005-2006 seasons, altogether he played 80 games. In 2007 season, he along with his friends was found in a minor accident of car and there he was injured on February 2. In the December of same year, his name was taken to his second consecutive NBA All Star Game. His 2008-2009 Seasons started with Allen Iverson being traded to the Detrout Piston where they exchange for Guard Chauncey Billups. Later in the 2009-2010 seasons, he made 30 points and 711 points winning against Jazz and Portland Trail Brazers.

In the season of 2010-2011, it was guessed that he had requested as a trade and in seaon of 2011-2012 it brought new hopes where it was all his full season as a Knick. In 2012, he was also named for Eastern Conference Player on the date of December 3. Again, his name was came up as a starter in the 2015 NBA All Star Game on January 22, 2015. It was in his seventh consecutive start and eight. Later on January 21st, 2016, he was also voted for the 2016 NBA All Star Game. He demanded a trade after being multiple conflict on 2017 with president Phil Jackson.

Anthony was dealt in exchange for Enes Kante, Doug McDermott. It was on September 25, 2017. In Oklahoma City game against Los Angeles Clipper on January 4, 2018 Anthony made 22 points. It makes the team, New York Knick into 21st place. Again in March 6, 2018 he scored 23 points in the same game against Houston Rockets. Recently on 19th March, 2018 he made 15 scores with the winning score of 132-125 against Toronto Raptors.

Talking about his personal life, he is married man. He married to beautiful lady, La La Vanzquez in the year of 2010. Previously, it was in the news that he got engaged to the Alani Nicole. Also they welcomed their first son named Kiyan Carmelo Anthony on 7th March, 2007. Anthony has dated Kat Stacks and Sheneka Adams, previously. In 2017, the current couple got separated.As of now, renowned basketball player Carmelo Anthony is currently spending happy and blissful moment with wife and son living on ‘The Upper West Side of Manhattan’.

Net worth
Anthony has an estimated net worth amount of $90 Million as of 2018. His annual salary is around $22.5 Million and also he makes additional $9 Million from endorsements. Recently, he made contract for over five years with the New York Knicks with the worth of $80 million. He also do charity work. He made charitable contribution of $4,282,000 in total.

This big-hearted young man, Anthony has been an inspiration to all the youths.

Achievements and Contributions of Carmelo Anthony

Talented basketball player, Carmelo Anthony has been selected six times as the NBA All-star. He has also won the "NBA Rookie Challenge MVP" in 2004. While at the 2004 Athens Olympics, he won the Bronze Medal. He is also the winner of two gold medals in 2008 and 2012 Summer Olympics. Carmelo has also been awarded with the Bronze Medal at the 2002 Junior Team. Carmelo Anthony has been linked to many charitable works. He was a spokesman for the Family Resource Center called "The Carmelo Anthony Youth Development Center" which was opened by Anthony on December 14, 2006. He is known to host an annual 3-on-3 tournament to raise fund for a local community center for a local youth in Baltimore. He has also contributed $1.5 million to the Living Classrooms Foundation. He has also made donations to relief funds. Anthony also donated $3 million for the construction of a basketball practice facility at Syracuse University.