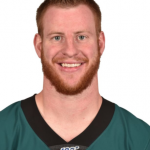 Carson Wentz is an American NFL footballer who plays in a quarterback position for his current team, the Indianapolis Colts of the National Football League. He was selected by the Philadelphia Eagles' second overall in the 2016 NFL Draft, making him the FCS's highest-drafted player. He made his professional NFL debut for Philadelphia Eagles in the 2016 regular season. Wentz was traded to the Indianapolis Colts on March 17th, 2021 in exchange for a 2021 third-round pick and a 2022 conditional second-round pick. He was reunited with former Philadelphia Eagles' coordinator and current Indianapolis Colts' head coach Frank Reich. During his training camp, he suffered a foot injury that required surgery. He underwent the surgery on 2nd August 2021. He played college football at North Dakota State, where he won five NCAA FCS national championships. His most successful season was in 2017 when he led the Eagles to an 11-2 record. He made his first TV show appearance on the talk show, "The Dan Patrick Show".

Colts quarterback Carson Wentz will start Sunday's game against the Seattle Seahawks nearly six weeks after having surgery on his left foot, which could have kept him out well into the regular season, coach Frank Reich said Friday. There was a lot of uncertainty about what Wentz's availability would be when Wentz injured his left foot on the second day of training camp July 29. Wentz had surgery Aug. 2, and the Colts gave a five- to 12-week timetable for his return. The quarterback returned to practice on Aug. 23, just three weeks after his surgery. "I know they had a very wide range of a timetable, and I knew that too," Wentz said this week. "I knew that, going in, a lot determined on how the surgery went and a lot of factors, but at the end of the day, I say God is good for getting me to this point." Wentz's return hasn't been a smooth one, though. He missed five days after being placed on the reserve/COVID-19 list because he was a close contact of a team member who tested positive for the coronavirus. Wentz is not vaccinated. Missing those days cut into his time to work on chemistry with his teammates; Wentz took part in a number of individual practices but had only three full practices since training camp started July 28.

What makes Carson Wentz so famous? 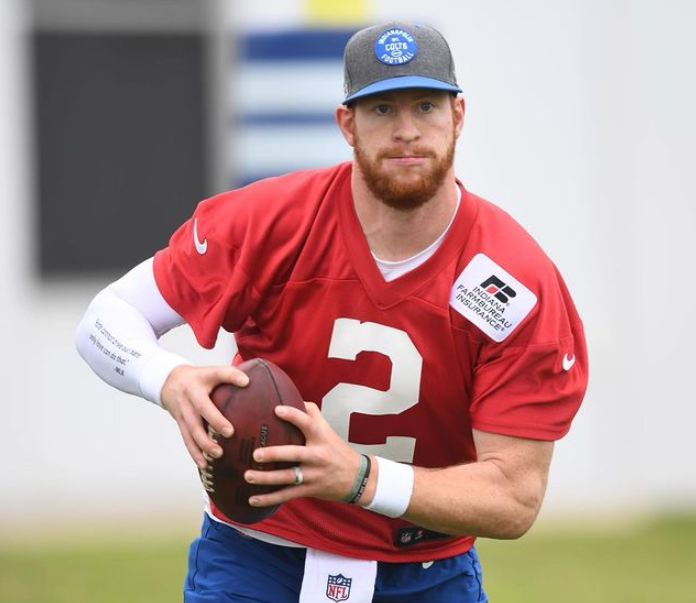 Where is Carson Wentz originally from?

Carson Wentz took birth on 30th December 1992. He was originally from Raleigh, North Carolina, the USA but he moved to North Dakota with his family at the age of three where he spent his early childhood. He holds American nationality and his ethnicity is American-White. Thus, his race is White. His birth name is Carson James Wentz. He celebrated his 28th birthday as of 2020. About his parents, he was born to his father, Doug Wentz, and her mother, Cathy Domres. His father was a linebacker at Northern State. He also has two siblings; Zach Wentz (brother) and Luke Wentz (brother). He follows the Christianity religion and his Zodiac sign is Capricorn.

Carson Wentz attended the Century High School in Bismarck and graduated in 2011. During his high school, he played defensive back, and also he played basketball and baseball for the Patriots. He was selected as the valedictorian of his class. He then graduated from NDSU in 2016 with a degree in health and physical education, finishing with a 4.0 GPA and twice earning recognition as Academic All-American of the Year by the College Sports Information Directors of America, first for Division I football and later for all Division I sports. 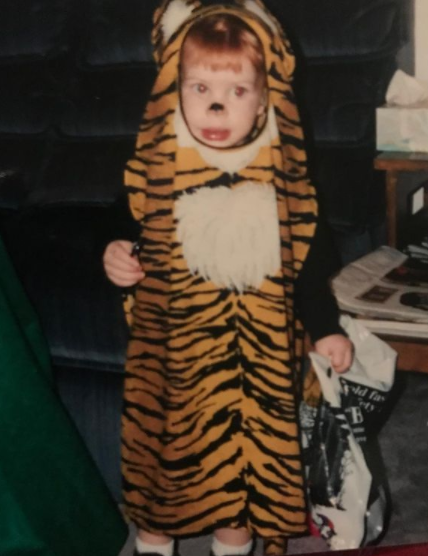 Carson Wentz is a married man at present. He announced his engagement with his long-term girlfriend, Madison Oberg on 6th February 2018 after the Eagles' victory in Super Bowl LII. Then, the duo got married on 16th July 2018. Their wedding took place in Bucks County, Pennsylvania, the USA. Their daughter, Hadley Jayne was born in April 2020. Carson's wife, Madison is currently pregnant with their second baby. As of today, the family is living  a happy life without any disturbances. His sexual orientation is straight and he is not gay. 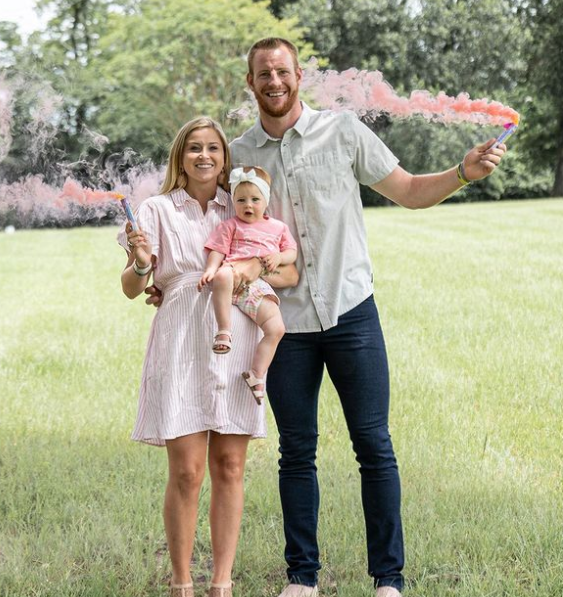 Prior to marrying Madison Oberg, he dated Melissa Uhrich, a registered nurse while studying in high school together. Despite having achieved fame, Carson has strived to keep his relationship private. However, he occasionally tweets about her, and once wished her on the eve of Valentine’s Day in 2017. In one of his interviews with ESPN, he shed some light on their relationship by revealing that they had decided to live apart until they got married.

Carson Wentz also launched the AO1 Foundation. He started a project in 2018 in conjunction with Mission of Hope Haiti to build a sports complex in the country. He held the first annual AO1 Foundation Charity Softball Game at Citizens Bank Park on 1st June 2018. It was announced that the game brought in over $850,000 when 25,000+ fans attended the event.

What is the Carson Wentz Annual Salary and Net Worth?

Carson Wentz is a professional NFL footballer who has made a huge sum of money from his professional career. As of 2021, the net worth of Carson is estimated to have $45 Million and his present annual salary is $32,000,000. On 12th May 2016, he signed a four-year deal worth $26.67 million, fully guaranteed, featuring a $17.6 million signing bonus with Philadelphia Eagles. On June 6, 2019, the Eagles signed Wentz to a four-year, $128 million contract extension with $107 million guaranteed, keeping him under contract through the 2024 season. He has also appeared in the following TV commercials such as Panini NFL Trading, Cards, Bose, Sanford Orthopedics, Bridgestone, Scheels. His main source of wealth comes from his football career and he is living a luxurious lifestyle as of today.

What is Carson Wentz Height?

Carson Wentz is a very handsome man with an athletic body build. As a freshman, he was 5 ft 8 in (1.73 m) in height, grew to 6 ft 5 in (1.96 m) as a senior. His present height is 6 ft 5 in or 196 cm and his balanced bodyweight consists of 108 Kg or 237 lbs. His hair color is honey blonde and his eye color is blue. He has a tall and imposing body. His other body measurements is unavailable at a moment.

Trivias About Carson Wentz You Need To Know.