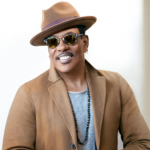 Charlie Wilson is an American singer, songwriter, record producer who is well known as the former lead vocalist of the Gap Band. He is regarded to be one of the influencing singes who has greatly influenced the global musical world in the late 20th and early 21st centuries.

Recipient of the Soul Train Icon Award, Wilson has provided large contributions in the industry with his number of albums and songs which even has earned him 13 Grammy Award nominations.

He was even named as the Billboard magazine's No. 1 Adult R&B Artist recently in 2020. Honored with a Lifetime Achievement Award in 2013, he is also the national spokesman of the Prostate Cancer Foundation. Besides, Wilson is quite active in social media sites with over 940k followers on Instagram: @imcharliewilson and has over 187k followers on Twitter: @CharlieWilson.

What is Charlie Wilson Famous for?

Where was Charlie Wilson Born?

Charlie Wilson was born on January 29, 1953, in Tulsa, Oklahoma, United States. His birth name is Charles Kent Wilson. His nationality is American. Wilson belongs to mixed ethnicity while Aquarius is his zodiac sign.

Born as the second son to his highly-praised father, Reverend Oscar Wilson, a minister in the Church of God in Christ, Charlie grew up alongside his older brother Ronnie and younger brother Robert in their hometown.

Growing up he often used to sing in church as well as in his junior high school's choir. At the early age of 3, he started taking singing lessons.

He started his early career carrying out jam sessions around the neighborhood following which they formed a band, the Greenwood Archer and Pine Street Band(GAP) in 1970.

Who is Charlie Wilson's wife?

Charlie Wilson is a married man and has been married just once to date. His first and only marriage is with his beautiful wife, Mahin Tat whom he met while he was in a drug rehabilitation program. The same year their first meet they got married in 1995.

Meeting Mahin changed his life dimension as he has been clean from his cocaine and alcohol addictions since then. Being together for over 27 years now, the couple has no children.

Wilson previously had been a drug addict as he went deep into the addiction in the early 1990s. Back then he was homeless, sleeping on the streets, At the lowest point of his life he, however, got over his addictions after he got enrolled in a Los Angeles drug rehabilitation center.

He was also diagnosed with prostate cancer and treated successfully with implants. He has been the national spokesperson of the Prostate Cancer Foundation for several years now and has actively supported the foundation encouraging black men to get tested for the disease.

How rich is Charlie Wilson?

Charlie Wilson has quite good earnings from his profession as a singer and songwriter. Having his career started in the 1960s first as a band member and then as a solo artist, Wilson has managed to come a long way up becoming one of the prominent singers of all time.

Releasing several albums and singles for more than 40 decades has surely earned him a hefty amount which is estimated to be around $15 million.

How tall is Charlie Wilson?

Charlie Wilson is a good-looking man with a well-maintained body physique in his 60s. He stands tall with a height of 5ft. 10inches. while his body weighs around 75kg. He has a brown complexion with bald hair and a pair of brown eyes.

Trivias About Charlie Wilson You Need To Know.