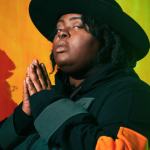 Jane Chika Oranika is an American rapper. She is better known by her stage name, Chika. She is best recognized for her freestyle takedown of Kanye West that she recorded and released over her own beat on the song "Jesus Walks". She is also known for having released the singles "No Squares" and "Coulda Told Me".

Chika garnered attention on social media before signing to Warner Records in 2019. In the same year, Chika was included in "XXL'"s 2020 Freshman Class and was nominated for the Grammy Award for Best New Artist. Additionally, she announced on 11th March 2021 that her second EP "Once Upon A Time" would be released at midnight. Chika has also won GLAAD Media Awards for her work in "Industry Games" in 2021.

What is Chika's Real Name?

Chika was born on 9th March 1997 with the real name of Jane Chika Oranika in Montgomery, Alabama in the United States. She is of American nationality and she came from Nigerian-American ethnic background. Similarly, her religion is Christianity. Her zodiac sign is Pisces. Thus, her race is black. She is the daughter of her father, Dr. Emmanual Oranika, and her mother, Dr. Patience Oranika. She has two older sisters.

Regarding Chika's education, she attended Booker T. Washington Magnet High School. She was accepted at the prestigious Berklee College of Music, but due to tuition costs, she enrolled at the University of South Alabama instead. However, she dropped out after her first year to focus on a music career.

Chika is an unmarried lady. She is presently believed to be single. But, on 14th February 2018, she posted an interesting tweet on her Twitter stating that she has found her girlfriend named Kailyn. Chika might be dating her potential lady love whom she mentions on Twitter, but, for now, her true relationship status is still a mystery. Concerning her sexual orientation, she is bisexual. She identifies as bisexual and addresses her sexuality in her music and videos.

What is Chika's Net Worth?

Chika is a versatile rapper who has a net worth of $1 million as of 2021. She has also a handsome amount of salary which is also thousands of dollars per year. She has earned a hefty amount from her song release, attending live shows, featuring in fashion covers, and merchandising sales. Chika was also featured in a Calvin Klein #MyCalvins advertisement in MAy 2019, also writing poetry for the brand's S/S 2019 campaign. In addition, her major source of income is from her rapping career.

How tall is Chika?

Chika has an ideal height of 5 ft 6 in or 167.5 cm whereas her body weighs around 88 kg or 194 lbs. She has black hair and dark brown eyes color. Chika also has inked some tattoos on her body. Moreover, her body build type is large. Her body measurements are not available at the moment