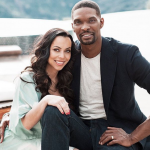 Chris Bosh is an American former professional basketball player. A high school "Mr. Basketball" in Texas, Bosh left Georgia Tech after one season to enter the 2003 NBA draft. He was selected fourth overall by the Toronto Raptors in a draft class that included multiple future NBA superstars such as LeBron James, Dwyane Wade, and Carmelo Anthony. Seeking to promote sports and education amongst youths in Dallas and Toronto, Bosh set up the Chris Bosh Foundation and regularly speaks to youths about the benefits of reading.

The Heat’s ceremony took place at halftime of the team’s game against the Orlando Magic. Bosh was greeted with highlights of his six seasons in Miami, which included six All-Star appearances and two NBA titles.

Bosh was also honored by Pat Riley, who assembled the Heatles that captivated the basketball world for four seasons. Then the jersey went up, as seen in the video atop this post. With his family looking on, Bosh had to hold back tears.

Bosh gave a short speech to the crowd, recounting how he first met Pat Riley and dropping a quip about beating Wade to the jersey retirement party. The exercise ended the only way it could, with Bosh informing the crowd he was about to unleash one last scream.

Chris Bosh was born in Dallas, Texas. His birth name is Christopher Wesson Bosh. He was born to parents Noel and Frieda Bosh. Chris had a love for basketball from a very young age. He began learning to play the game when he was only 4 years old. Moreover, Bosh’s parents were also incredibly supportive of his passion.

Now looking at his education, Bosh joined Lincoln High School in Dallas. Whilst in the school, he was doing amazingly well in academics and extra-curricular activities too. Whilst graduating with honors, he even led his school team to the No. 1 ranking in the country. Bosh did so by winning the USA Today National Championship in a perfect season with 40 wins and no losses. He then joined Georgia Tech to study computer imaging and graphics designing. He was also able to do very well with the college team averaging 15.6 points in his freshman year.

What team is Chris Bosh on?

Now coming to the personal aspects of Chris’s life, he is a happily married man and has been together with his wife Adrienne Williams for quite some time now. The two said their vows in 2011 and have three sons, Dylan, Jackson, Lennox, and a daughter Pheonix, together. Moreover, Chris also has a daughter Trinity from his last relationship.

Bosh has also had a few health issues. He was diagnosed with a blood clot in his lung. Whilst he did treat himself, the problem came back again in 2016. This time he was diagnosed with blood clot in his leg. This particular issue meant that his career had to be cut short. Despite struggling with these injuries, Bosh never gave up and kept fighting.

How much money is Chris Bosh worth?

For many years now, Chris has been one of the best players NBA has ever seen. He has been able to establish himself for his amazing work ethic and passion for the game. He is also one of the highest earning players in the game. Reports suggest that Bosh has a net worth of $50 million. Despite making all that money, he has also gone on to help other people. Chris has established the Chris Bosh Foundation to help young people in Toronto and Dallas with their academics and athletics.

Bosh is also pretty active on social media platforms. He has a massive fanbase on Instagram with over 2 million followers. Chris goes by the handle @chrisbosh on the platform, so be sure to follow him.

Observing his body statistics, He stands a height of 6 feet 11 inches and weighs around 235 lbs. Similarly, he has a pair of brown eyes and black hair color. Furthermore, He has an athletic body build. His other body information was not disclosed yet. In the case of disclosed, we will let you know.

Trivias About Chris Bosh You Need To Know.