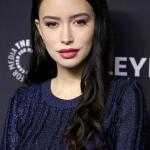 Christian Serratos is an American actress who plays Rosita Espinosa in AMC's The Walking Dead TV series, based on the comic book of the same name. She is also known for playing Suzie Crabgrass in the Nickelodeon series Ned's Declassified School Survival Guide and Angela Weber in The Twilight Saga series. Let's know more about the actress through this article.

Where is Christian Serratos born?

Recalling her early life, Christian Serratos was born in Pasadena, California. She is of American nationality and belongs to mixed ethnicity, Mexican and Italian. Her mother is a jewelry designer, and public relations and marketing agent at ACSPR of Mexican descent and father a set construction worker of Italian descent.

During her childhood, she began figure skating. Likewise, she once mentioned that “My coaches were talking about the Olympics and it was crazy. Now, I just do it for fun.”. At the age of seven, Serratos signed with Ford Modeling Agency. Further, the information about her parents, siblings and academic qualification is yet to be disclosed.

When did Christian Serratos begin to start acting?

Is Christian Serratos married or not?

Reflecting on her personal life, Christina Serratos is a married woman. She got married to her long-term boyfriend David Boyd. The couple dated for three years and got married in March 2017. Moreover, Christian and her spouse are the parents to an adorable daughter Wolfgang Serratos Boyd born in May 2017. The news of her pregnancy first hit the headlines in March 2017 when her partner announced that he was going to be a daddy soon.

Furthermore, She makes a rare public appearance, however, she frequently shares photos with her partner and child on her Instagram account. As of now, the family of the trio is living happily with no news and signs of their divorce and affairs. Before getting married to David, She was in a relationship with David Werkheiser. The couple began dating 2006 but they ended their relationship in 2007.

What is the net worth of Christian Serratos?

Being engaged in the entertainment industry since 2004–present, Christian has supposedly earned a good amount of money from her successful career. As per online sites, her estimated net worth said to be $2 million at present. She receives a salary of around $55K-$85K on average for her appearance in TV series and 150K from the portrayal in movies.

How tall is Christian Serratos?

Observing her body physics, Christian stands a height of 5 feet 7 inches and weighs around 55 Kg. She has a pair of dark brown eyes and dark brown hair color. Further, her body measures 33-24-35 inches. she used 38B bra size, 2 (US) dress size and 8.5 (US) shoe size.

Trivias About Christian Serratos You Need To Know.