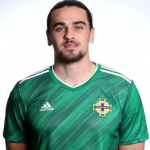 What is Ciaron Brown Famous For?

Where is Ciaron Brown From?

Ciaron Maurice Brown was born on 14 January 1998. His birthplace is Hillingdon, London, England. Detail about his parents has been kept secret and has not been disclosed yet. He holds Northern Irish nationality. His horoscope sign is Capricorn.

Ciaron Brown stands at a height of 1.85m i.e. 6 feet and 1 inch tall. He has a bodyweight of 76kg. He has an athletic body build. His eye color is hazel and his hair color is black. His sexual orientation is straight. His other body measurement such as chest size, biceps size, and waist size is still got to get revealed yet. Overall, he has got a healthy body.

Ciaron Brown earns from his professional career as a football player. His income is from contracts, salaries, bonuses, and endorsements. As of 2022, his salary is £72,800 but his net worth is not revealed yet. His market value is around €400 Th. Any updates on his net worth will be updated here soon.

Trivias About Ciaron Brown You Need To Know.