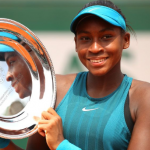 Who is Coco Gauff? What makes her famous?

Cori Gauff is an American professional tennis player from Atlanta, Georgia. At a young age of 15, this right-handed player is already a prominent name in the world of sports who has many credits to her name. She made history on July 1, 2019, as the youngest ever player to upset the five-time champion Venus Williams in straight sets, that too in her Grand Slam debut match. Cori is the youngest ever female player to advance to the finals in the US Open singles and also the youngest female player to debut on Grand Slam. In 2018, she became the second youngest player to win the Junior French Open.

Coco Gauff, the 15-year-old Wimbledon sensation, is through to the fourth round of the singles bracket, having beaten all of Venus Williams, Magdaléna Rybáriková, and most recently, Polona Hercog. But in the fourth round she will run into an even bigger test than Williams, Rybáriková and Hercog: world No. 7 (and former No. 1) Simona Halep.

It’s not that Halep’s game is specifically catered to beating Gauff, it’s just that she doesn’t typically make very many mistakes. Halep is among the more consistent players on the WTA Tour, so the hope of catching her on a bad day is diminished not that Gauff’s play would indicate she needs a bad day from her opponent to survive.

Just the opposite, actually. She seems to thrive when her back is against the wall, and her biggest strength is versatility deeper into matches. She makes adjustments on the fly rather than getting bogged down by lacking play. When things aren’t going her way, she battles back, usually trying different stances to keep her opponent guessing.

Gauff’s style matches up well with Halep, but when you have two all-around players squaring off for the first time, it’s easy to favor the one with more experience, like Halep.

They don’t match up uniformly or anything, Halep is much better at the baseline and handling her power from that area of the court will be Gauff’s primary hurdle to clear on Monday. Gauff still has a lot of work to do with her forehand though to her credit, when other players punish her weak forehands, she has the athleticism to recover from them.

Who are the parents of Coco Gauff?

Back to Coco early life, The tennis player was born to Mr. Corey and Mrs. Candi Gauff. Her father Corey played basketball at Georgia State University and doubles as her coach. Her mother Mrs. Candi was a track and field athlete at Florida State University. In regards to her siblings, she has two younger brothers.

Regarding her education, Coco does not attend school institutions but is instead home-schooled by her mother; Mrs. Candi who is a former teacher. Her father is her head coach and trains her on her tennis career.

Gauff has trained with Gerard Loglo at the New Generation Tennis Academy in Delray Beach, Florida. When she was eleven years old, she was chosen by Serena Williams’ coach Patrick Mouratoglou to be part of his Champ’ Seed foundation and trained with him in Nice, France.

When did Coco Gauff pursue her tennis career?

Is Coco Gauff in a relation?

The budding tennis player is currently not in a relationship, preferring to focus on her career for now. We will update this section once she does get into a relationship.

How much net worth Coco Gauff owns?

The net worth of Cori Gauff is believed to be around $500 thousand dollars. She has already signed multi-year endorsement deals with New Balance, tennis rocket manufacturing company Head and an Italian food company Barilla, which also sponsors Roger Federer. According to Forbes, she would earn at least $1 million from these deals in 2019. Without a doubt, Gauff’s net worth to go multifold in the years to come.

How tall is Coco Gauff?

In regards to her physical appearance, Coco stands a height of 5 feet 10 inches and weighs around 55 kg. She has black hair color and dark brown eyes. She uses a 32B bra size and 7.5 (UK) size of the shoe. Further, her body measures 33-26-34 inches.

Trivias About Coco Gauff You Need To Know.