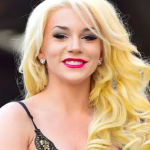 Courtney Stodden is an American Reality Television Personality, Model, Social Media Sensation, Singer, and Songwriter from Tacoma, Washington. She is also a national spokesperson for PETA, the animal rights activist organization. After competing in beauty pageants in her home state of Washington and releasing her original music, then she came to international attention when she married then 51-year-old actor Doug Hutchison in 2011. Let's know more about her through this article.

What is Courtney Stodden famous for?

Where is Courtney Stodden born?

Recalling her early life, Courtney was born in Tacoma, Washington to Alex John Stodden and Krista Kay Keller in the year 1994 as Courtney Alexis Stodden. Currently, she is 25 years old. She has two sisters, Ashley and Brittany. Similarly, she is of American nationality and belongs to White-Caucasian ethnicity. Her birth sign is Virgo and has faith in Christianity.

She describes her childhood as beautiful and fun, stating that she was extremely spoiled, in a good way. From a very young age, her passion has been singing and writing her music. For education, she homeschooled through an online private Christian academy.

What does Courtney Stodden do?

Who was Courtney Stodden married to?

Reflecting on her personal life, Courtney was married to Doug Hutchison in Las Vegas, Nevada in 2011. She is a third wife of him. After living two and a half years together, the couple going to ending their marriage in 2013. She later told Fox News that their 34-year age gap was a primary contributing factor for their divorce.

In August 2014, the couple announced that they had reconciled, with plans to renew their wedding vows later that year. It was announced on May 17th, 2016, that they were expecting their first child. In mid-July, around three months into her pregnancy, she announced she had suffered a miscarriage.

In January 2017, it was reported that they have separated. However, they are still living together for the time being. In March 2018, she filed for divorce and did not request spousal support.

What is Courtney Stodden's net worth?

Being a reality television personality by profession, Courtney earns a decent amount of money and popularity in the field of the entertainment industry. Based on some online reports, her estimated net worth said to be $500 Thousand at present. However, her salary, assets, and vehicle information is yet to be disclosed.

How tall is Courtney Stodden?

Observing her body physics, Courtney stands a height of 5 feet 3 inches and weighs around 48 Kg. Similarly, she has a pair of blue eyes and blonde hair color. Further, she has a body measurement of 38-24-36 inches. She used 34E bra size and 6 (US) shoe sizes.

Trivias About Courtney Stodden You Need To Know.