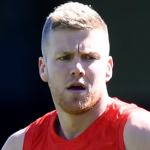 Dan Hannebery is a professional Australian rules footballer playing with the Sydney Swans in the Australian Football League (AFL). His original teams are Oakleigh Chargers / Xavier College. His current club is Sydney and plays by wearing shirt number of 4. His playing position is Midfielder. He was drafted from the Oakleigh Chargers with the 30th pick in the 2008 National Draft and made his debut at the end of 2009 season.

Dan Hannebery was born on 24th February 1991. He completed his education at Xavier college and made his debut in round 16, 2009, for Sydney against Carlton, while still attending high school. He is the son of former Footscray player Matt Hannebery.

Dan has got an attractive body. He stands 181 cm tall and has a balanced weight of 81 Kg.

Dan is a very secretive person regarding his personal life. He has not revealed about his love life to the media. He may be single or is in a relationship.

Net worth of Dan

The net worth of Dan is not revealed yet and will be updated soon.

Trivias About Dan Hannebery You Need To Know.