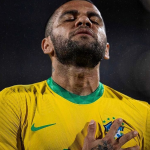 Dani Alves is a Brazilian professional football player who plays for the Brazil national team. His playing position is Right back. His shirt number is #8 for Barcelona. Previously, he had played for Bahim, Sevilla, Juventus, and many more clubs. He has won two UEFA Cups, Supercopa de Espana, UEFA Super Cup and the FIFA Club World Cup and Copa del Rey and more.

When was Dani Alves born?

On 6th May 1983, Daniel was born. Dani Alves's birth name is Daniel Alves da Silva. His place of birth is Juazeiro, Brazil. He belongs to the nationality of Brazilian. His father name is Domingos Alves da Silva. His father supported him very much to play football. His sun sign is Taurus. At the age of 6, he started as a winger, but due to the lack of goals he scored, his father re-positioned him as a right back, a position he still plays up to this day. He worked as a farmer and a trader in his youth.

Who is Dani Alves' wife?

Dani Alves is a married man. He is married to his beautiful girlfriend-turned-wife, Joana Sanz. Joana Sanz is a Spanish supermodel. They started dating in April 2015 and later got married in July 2017. His sexual orientation is straight.

Previously, he married Dinora Santana. The couple is blessed with two children.

What clubs does Dani Alves play?

How much is Dani Alves worth?

The net worth of this famous football player is estimated to have $60 Million as of 2022. His current market value is €1 Million. He made this fortune from his football career. He is living a lavish lifestyle at present. Back then, he said he came to Sevilla as a boy and was leaving as a man. The official price of the transfer stood at £23 million up-front, with approximately £7 million more depending on a number of performance-related factors over the next few seasons of Alves' Barcelona career, making him one of the most expensive defenders in history and the third-most expensive player bought by Barça. In 2008, he signed a four-year contract with Barcelona, which included a buy-out clause of €90 million. Back in June 2006, Sevilla agreed to sell Alves to Liverpool, but Liverpool was unable to match Sevilla's asking price of around £8 million.

The height of Dani is 1.71 m. He has a balanced weight of 64 Kg. His hair color and eye color is Black. He has a trimmed beard with side-cropped hair. He has his chest, neck, and both arms covered in tattoos.