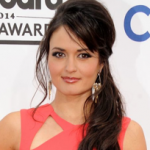 Danica Mae McKellar famed as Danica McKellar is an American education advocate, actress, as well as a mathematics degree holder. She played Kevin Arnold's on-off girlfriend Winnie Cooper in the television series The Wonder Years and from 2010-2013 and since 2019, she voiced in the animated superhero series Young Justice. She has also proved a new math theorem, the Chayes-McKellar-Winn Theorem. She was cast in the Netflix original series Project Mc2 in 2015. She has also appeared in several movies such as Good Neighbour, Black Hole, Heatstroke, and much more. Overall, she is a very talented actress.

The legendary country singer is teaming up with Hallmark Channel to bring her amusement park to the small screen with an original holiday movie starring Danica McKellar, titled Christmas at Dollywood. Filming kicks off in Tennessee in August. Parton will make a special appearance in the film, which is slated to premiere in December as part of the network's 10th anniversary of Countdown to Christmas. (The nine-week campaign launches Oct. 25 and runs through New Year's Day.) McKellar's mother, Mahaila, and son, Draco, will also have cameos. n Christmas at Dollywood, Rachel Lewis (McKellar) is a single mom and award-winning Broadway producer who learns investors have mismanaged her latest theatrical -- a holiday extravaganza -- into bankruptcy, forcing the show to close before it even opens. Dismayed, Rachel's friend calls from Tennessee to tell her about an opportunity to produce a show for the 20th anniversary of the Smoky Mountain Christmas Festival at Dollywood. The only caveat? Rachel will have to work with Luke Hakman, Dollywood's entertainment director who sees the holiday show as a stepping stone to become the park's new general manager. "Dolly Parton is a bright light who is rich in spirit, kindness, and love. Christmas at Dollywood features Danica McKellar in a story about finding love and new beginnings in the most familiar place: home. A holiday movie set in a winter wonderland like Dollywood exemplifies the quality of the talent, storytelling, and filmmaking that has made Countdown to Christmas the No. 1 program event on television for 10 years," said Michelle Vicary, Executive VP of Programming and Publicity at Crown Media Family Networks.

Danica McKellar was born on 3rd January 1975 in La Jolla, California, the United States as Danica Mae McKellar. She grew up in Los Angeles along with her parents. She is the daughter of Mahaila McKellar and Christopher McKellar. She has a sister, Crystal McKellar and two brothers: Connor McKellar and Christopher McKellar Jr. She is American by nationality and her ethnicity is mixed(English, Scottish, German, Spanish, French, Dutch, and Portuguese). From the beginning of her childhood, she had a keen interest in acting and began to learn from a very early age. As per her education, she completed her graduation with a Bachelor of Science in Mathematics with highest honors at the University of California, Los Angeles. As of 2019, her age is 44.

Danica McKellar is a very beautiful woman with an average height of 5 feet 4 inches and balanced weight of 53 kg. She has a beautiful pair of brown eyes and black hair. Her other body measurements include 33 inches bra size, 23 inches waist, and 34 inches hip. His dress size is 2 (US) and shoe size is 7 (US). Overall, she has got a very healthy body.

Danica McKeller is a married woman. She has been married twice in her life. Previously, she was married to composer Mike Verta on March 22, 2009. Prior to their marriage, the couple dated for more than eight years. Later in 2010, they welcomed their first child as a son named Draco. However, they couldn’t carry their marriage life for so long and divorced in February 2013.

After a year, she got engaged to her boyfriend Scott Sveslosky on July 16, 2014. Since their relationship began, the lovebirds spent some romantic times together and finally tied their knot on November 15, 2014, in Kauai, Hawaii. As of today, the couple is enjoying their company and living elegantly without any sign of divorce.

Net Worth of Danica McKeller

Danica McKeller is a very successful woman. Her career has paid her a lot of fortune. Currently, she has a net worth of $3 million. But she has not revealed her exact salary to the media. Overall, she is satisfied with her earnings and she is living a luxurious lifestyle from the money from her career.