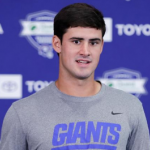 Daniel Jones is an American football quarterback for the New York Giants of the National Football League (NFL). He had been selected as the sixth overall pick in the 2019 NFL draft. Jones began his football career in college where he played college football at Duke University. He broke the record with 6,997 passing yards and 98 touchdowns. Read more on his love life, career highlight and physical attributes.

Daniel Jones Puts on a Show in Giants’ Rain-Delayed Victory 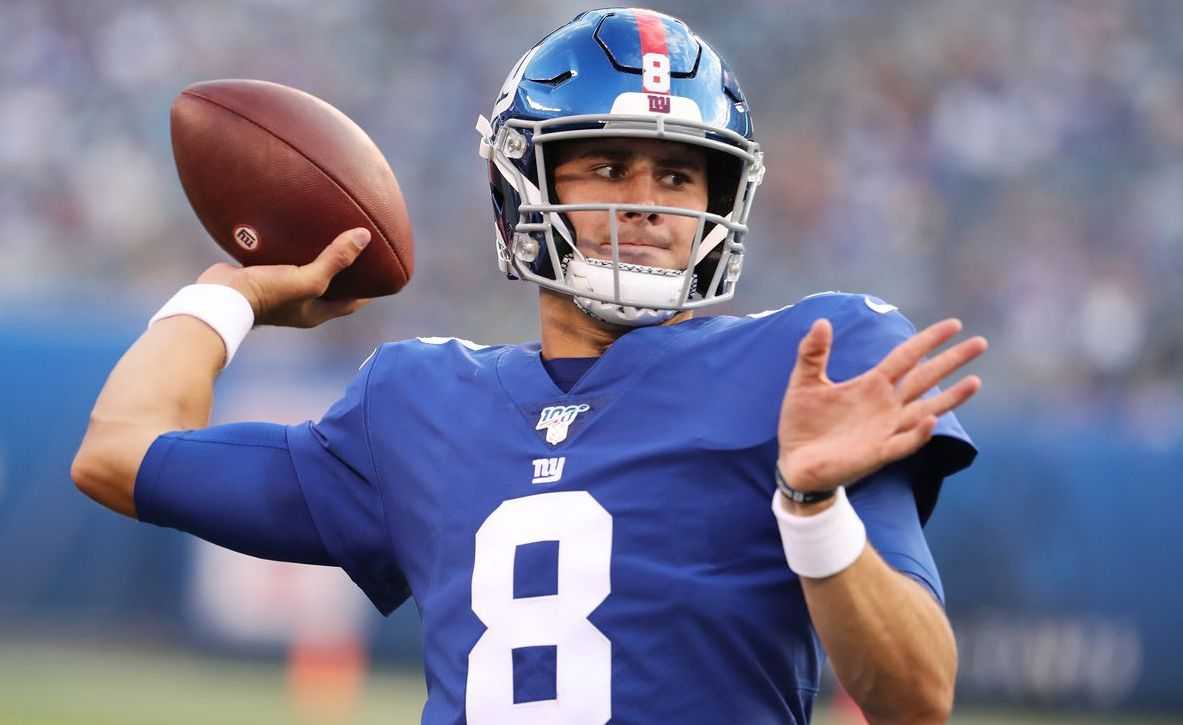 Daniel Jones threw a touchdown pass in his only series and opened speculation on how long he will have to wait to replace Eli Manning as the Giants’ starting quarterback. His strong showing helped propel his team to a 31-22 victory over the rival Jets on Thursday night. The preseason opener for both teams was suspended for 59 minutes late in the first quarter when lightning and heavy rain rolled into the MetLife Stadium area.

By that time, Jones had Giants fans on their feet. Taking over after Manning had a three-and-out series, Jones, the No. 6 overall pick in the 2019 draft, connected on all five of his passes, the final one a perfect 12-yard touchdown to Bennie Fowler III in the right corner of the end zone. Sam Darnold and the Jets had looked just as good on their opening series for Coach Adam Gase, going 75 yards in seven plays against a defense that many think is the Giants’ weak link. Darnold completed passes of 32 and 28 yards before finding Jamison Crowder for a 3-yard touchdown.

Alex Tanney added a 51-yard touchdown pass to Russell Shepard, linebacker Jake Carlock scored on a 59-yard interception return and Kyle Lauletta hit T.J. Jones with a 31-yard touchdown pass for the Giants, who were 5-11 last season. Aldrick Rosas added a 23-yard field goal. Eli McGuire caught a 7-yard pass from Trevor Siemian and Luke Falk threw a 2 yarder to Greg Dortch for the Jets’ other touchdowns. Chandler Catanzaro, who missed two extra points, hit a 34-yard field goal for the Jets, who were 4-12 under Todd Bowles. 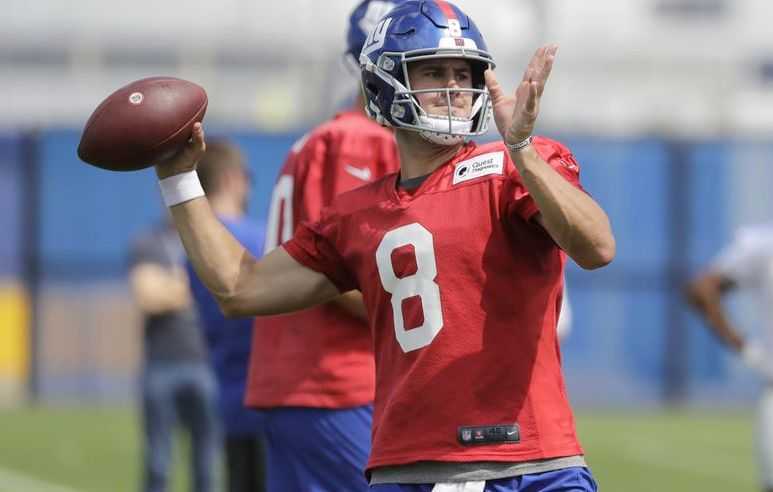 Where is Daniel Jones born?

Recalling his early life, Jones was born in Charlotte, North Carolina to the oldest son of Becca and Steve Jones. He has three siblings altogether. They are Becca, Bates, and Ruthie. He is American by nationality belongs to mixed ethnicity. His birth sign is Gemini.

Regarding his education, Jones attended Charlotte Latin School in Charlotte, North Carolina. Later, he enrolled at Duke University to continue his playing interest. He graduated from Duke University in December 2018 with a degree in economics. 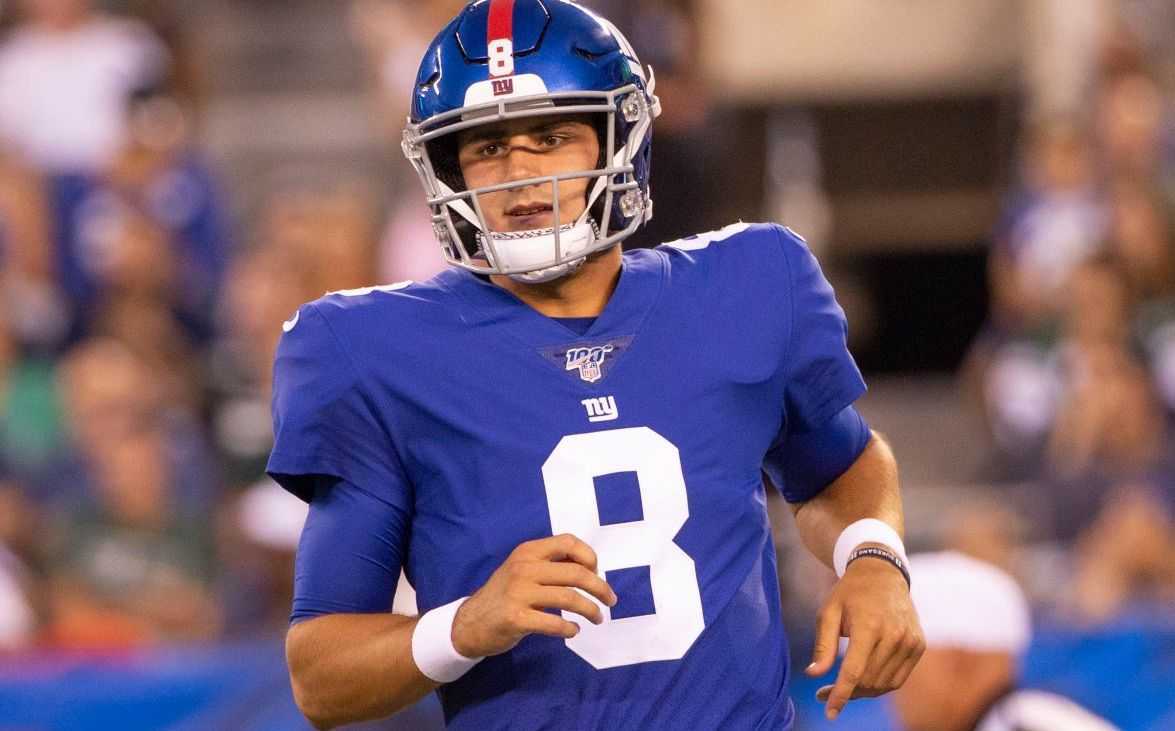 When did Daniel Jones pursue his career as a footballer? 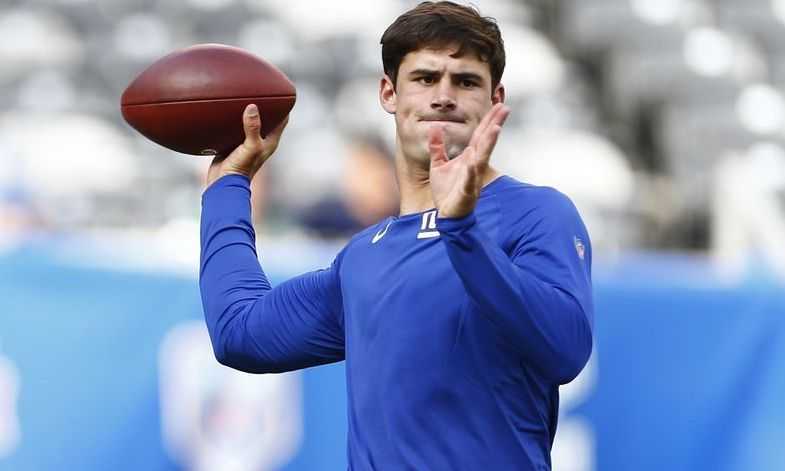 Reflecting his personal life, Daniel Jones is still unmarried but romantically linked with Ella Bonafede, a Long Island native. His girlfriend Ella Bonafede belongs to a stunning physical beauty that can charm anyone easily. Details of his past relationship are yet to be revealed. However, since he has been doing well in his career as an NFL player, his romantic love affairs going well.

How much net worth does Daniel Jones own?

Daniel Jones was drafted in the 2019 NFL Draft, so he entered into the NFL basic salary structure which up to $500,000 monthly. Considering his NFL’s performance and getting a bonus from the team it can be said he earned about $7 million in 2019. Now, it may be safe to assume that he has $7 million as the net worth.

How tall is Daniel Jones?

Observing his body statistics, Daniel has an athletic body with a height of 6 feet 5 inches tall. His weight is approximately 100 kilograms. Similarly, He has a pair of hazel eyes and brown hair color. His other body information is yet to be disclosed. In the case of disclosed, we will let you know.