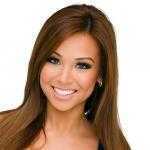 Dannie Riel, the gorgeous Canadian model was born on 16 June 1988. Besides modeling, she is also a YouTube persona and has millions of followers. She posts travel vlogs and behind-the-scenes videos of photoshoots on her YouTube channel. Her boldness and beauty earned her a “Sexiest Asian Girl on Earth”. She has also gathered millions of followers on her every social account. She loves living life to the edge and she is a daredevil by nature.

Dannie Riel was born in Canada. The native of Manitoba is the daughter of Chinese and French parents and of Canadian nationality. However, she describes herself as a "French Chinese human". There is no any information regarding Riel's parents and siblings on any social sites. Neither Riel has mentioned about them in any media. Information about her early life and education is also a matter of interest.

Riel must have dreamt of being a supermodel since her early age. She is considered one of the few models who established themselves via the social media. Riel used social media as a platform to expose herself in the modeling world. Due to her determination, hard work and admiration towards her passion, she has inspired and earned millions of followers. Riel has already managed to achieve her dreams to some extent. She has modeled not only in Canada, but she has also traveled to several countries as well.

Riel was initially spotted in Sports Compact Night by SCD Team. This exposure earned her attention from several popular and reputed magazines and media.

Riel has also started her own online clothing store with a brand name, “Riel Brand Clothing”.

She was asked a very interesting question, “Would you rather chill on a beautiful beach or go skydiving?”. She answered very cleverly, ”How about skydiving over a beautiful beach? I’d rather be chilling with a drink in my hand while skydiving”. So, she is a fun loving and adventurous person.

The not so tall 5 feet 2 inches model weighs 103 lbs/47 kg. Her beauty and amazing personality cover the flaw. However, she is in a profession where what really matters is personality and beauty rather than height. Talking about her body measurements, her breast size is 34 inches B, waist size is 24 inches and her hips measure 33 inches. She has the great sex appeal that makes modeling agents sign her.

The stunning and glamorous model has light brown long hair; light brown and grey eyes. She is really very beautiful and does not need much makeup to enhance her beauty. But as per the need of her profession where makeup is a must thing, she always looks killer in whatever makeup and dress she wears. Her feet are quite large and her shoe size is 6.5. it has been stated that the hot model has undergone plastic surgery. She also had breast implants in order to look sexier.

Dannie Riel was in a long-term relationship with her financial advisor, Ken Nguyen. She was planning to get engaged with her longterm boyfriend. However, it is reported that the couple has fallen apart. They have not disclosed the reason for their split. They decided to part ways on mutual understanding.

Currently, there is no news about Riel dating anyone. However, she is believed to be a very loving person.

She has an account on every possible social site. This makes it easier for her admirers and fans to get information about her day to day activities. She has a deep interest in internet surfing and text messaging.

As of 2018, the net worth of Dannie Riel is estimated at around $2 million. She makes a good income from the modeling assignments. Not only form modeling, but she also makes money by hosting party events all over the world. She aims at becoming a self-made millionaire. Besides modeling, she earns from her YouTube channel and her online clothing brand as well. A clip from her interview with the Dsport magazine can be found on the internet which is worth reading. In the interview, she told that her dream car is a sexy gun-metal Lotus Elsie. She is usually busy updating her YouTube channel “The Riel”. She believes that hard work and struggle lead a person to the path of success.