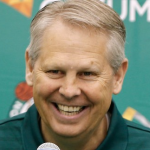 Daniel Ray Ainge, well known as Danny Ainge is a former basketball and baseball player. Currently, he serves as the general manager and president of basketball operations for the Boston Celtics. He won two NBA titles with the Boston Celtics in the 1980s. Let us learn more about the player below.

What is Danny Ainge known for?

Did Danny Ainge face another heart attack in 2019?

Danny Ainge, the president of basketball operations for the Boston Celtics, had a mild heart attack Tuesday night in Milwaukee, the team said. He then received immediate medical attention and is expected to make a full recovery, the team said. He is scheduled to return home later Thursday.

Ainge was with the team in Milwaukee, where the Celtics split the two opening games of their Eastern Conference semifinal series with the Bucks. Boston plays host to Milwaukee on Friday night in Game 3 and is 5-1 in the playoffs after sweeping the Indiana Pacers in the opening round.

Ainge previously had a heart attack in April 2009, when he was 50. The Celtics, in that instance, called it a “minor heart attack.”

Where is the birthplace of Danny Ainge?

Danny was born in Eugene, Oregon spent his early years at his birthplace. He is of American and belongs to white ethnicity. Born in the mid of March, his zodiac sign is Pisces. Ainge was born to Don and Kay Ainge, and Doug, Laurie, and David are his siblings.

When did Danny Ainge pursue his baseball career?

Who is the wife of Danny Ainge?

Reflecting his personal life, Ainge is a married man and is very happy in his conjugal life with Michelle. He is not only accountable in his job but also a responsible husband. From his relationship with Michelle, he has six children; Ashlee, Austin, Tanner, Taylor, Copper, and Crew.

Now, the family has grown pretty big. Furthermore, Ainge's son Austin serves as a director of player personnel for the Boston Celtics, and he also played basketball at BYU. His son Tanner is a lawyer and political candidate. His nephew Erik Ainge is an American football quarterback, who played college football at Tennessee. He and his family are devoted Christian and the members of The Church of Jesus Christ of Latter-day Saints.

In 2009, Ainge suffered a mild heart attack and another in 2019. Currently, he resides with his family in Wellesley, Massachusetts. He is the philanthropist and the associated number of the charitable organization since retiring from his playing career.

How much is Danny Ainge net worth?

As of late-2019, sources estimate a net worth that is at $10 million, mostly earned through a successful career in basketball. He also played professional baseball and tried his hand at a basketball coaching career. As he continues his executive role, it is likely that his wealth will continue to increase.

How tall is Danny Ainge?

Observing his body statistics, Danny stands a heigh of 5 feet 4 inches and weighs around 88 kg. Similarly, he has a pair of hazel-brown eyes and grey hair color. His other body information was yet to be disclosed. In the case of disclosed, we will let you know.

Trivias About Danny Ainge You Need To Know.