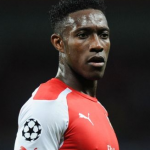 An English professional player who plays for Premier League club Arsenal and the England national team is known as Danny Welbeck. He plays as a forward and also plays as a winger. Danny Welbeck is representing himself in Russia for the World Cup 2018 as part of the England team by showing his skills, talent and performance to all.

Danny Welbeck was born on 26th November, 1990. He was born and raised in Longsight, Manchester, City of England. His full name Daniel Nii Tackie Mensah Welbeck. His mother name is Elizabeth Tumtuo Welbeck and his father name is Victor Chris Welbeck. Both of them are Ghanian parents. Danny lived all his life at Manchester where he was born.

Danny Welbeck started his career by joining a local team named Fletcher Moss and picked up by the youth academy of Manchester United at the age of just 8. Welbeck made his debut for the club’s U-18 squad in a match against Sunderland on 8th April 2006 at the age of 16. At FA Youth Cup, Danny Welbeck made 8 goals in 28 appearances which also include his winning goal.

In 2nd September, 2014, Welbeck signed a contract with Arsenal for long term with a fee of £16 million. Welbeck scored his first goal for the club against Aston Villa on 20th September. In 1st October, 2014, Danny Welbeck made an amazing hat-trick in the UEFA Champions League match against Galatasaray.

Due to the knee injury, Welbeck was out of the team for eight months in season 2016-17. He made his comeback in FA Cup match against Preston on 7th January, 2017. Arsenal defeat Chelsea at the final match of FA Cup at 27th may, 2017.

At Wembley Stadium on 29th March 2011, Welbeck was first introduced in the England senior team in a friendly match against Ghana by replacing Ashley Young. Then he inducted in the 23-man squad for Roy Hodgson’s England team that participated in the UEFA Euro 2012. He then scored his first goal against Belgium on 2nd June 2012. For FIFA World Cup 2014, Welbeck scored 4 goals in 2 qualification matches against San Marino on 12th October 2012 and against Moldova on 6th September 2013. He scored twice in the first match of England at the UEFA Euro 2016 qualification. Recently in March 2017, Danny Welbeck is selected for the 2018 FIFA World Cup for the preparation of  friendly matches of England squad.

Welbeck is unmarried till now but he is in affair with his girlfriend. He is 6 feet tall. His birth sign is Scorpio. He is a popular face of Nike and AON. The total net worth of Welbeck is estimated to be $15 million including $3.25 million salary. Welbeck currently drives an Audi S3 worth of $60,000.