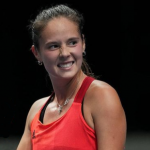 Daria Sergeyevna Kasatkina, excellently known as Daria Kasatkina is a Russian professional tennis player. She was ranked the 43rd best female singles player in the world in 2016 and was also ranked the 24th best doubles player in the same year. She made her top-ten debut in the WTA rankings towards the end of the 2018 season and won four WTA Tour titles in singles as well as one title in doubles. Daria first picked up a tennis racket at the age of 6 as she began training formally by age 11 and won a junior Grand Slam title at the French Open in 2014. She reached the third round of the 2022 Australian Open as the 25th seed and reached her first WTA 1000 semifinal of the season and second of her career at the 2022 Italian Open. Moreover, Daria did not compete in the 2022 Wimbledon Championships due to the All England Club's decision to ban Russian and Belarusian players.

What nationality is Daria Kasatkina?

Daria Kasatkina opened her eyes for the very first time on 7th May 1997 in Tolyatti, Russia. She was born with the real name of Daria Sergeyevna Kasatkina in a Christian religious family. She holds Russian nationality and she came from Russian-white ethnic background. Daria recently celebrated her 25th birthday in 2022 and as per her birth date, her zodiac sign is Taurus. Thus, her race is white. Her father, Sergey Igorevich Kasatkin is an Engineer and Athlete whereas her mother, Tatyana Borisovna is a Lawyer as well as Athlete. Both of her parents were nationally ranked athletes in Russia; her mother in athletics, and her father in ice hockey. She also has an older brother, named Alexandr who also played tennis.

Who is Daria Kasatkina Dating?

Daria Kasatkina is an unmarried woman and talking about her sexual orientation, she is lesbian. She is in a romantic relationship with her beautiful partner Natalia Zabiiako who is a Russian-Estonian competitive pair skater. Daria said that she "found living in the closet impossible" and also spoke out against the attitudes towards the LGBTQ+ community and restrictions of rights within Russia.

Furthermore, Kasatkina also said. "This notion of someone wanting to be gay or becoming gay is ridiculous. I think there is nothing easier in this world than being straight." "Seriously, if there is a choice, no one would choose being gay. Why make your life harder, especially in Russia? What's the point?" she added.

How much is Daria Kasatkina Net Worth?

Daria Kasatkina is a talented woman who has a net worth of $3 million as of 2022. She has also a fine amount of salary which is around thousands of dollars per year. She has also won prize money of US$8,546,680. Dari has also done endorsement work for several brands such as Nike, Tecnifibre, and Instaforex form where she is earning a handsome amount of money. In addition, her major source of income is her tennis career and she is sincere in her work.

How tall is Daria Kasatkina?

Daria Kasatkina stands at an ideal height of 1.70 m (5 ft 7 in) with a balanced body weight of 60 kg or 132 lbs. She has good-looking light brown hair and dark brown eyes color. Additionally, her body build type is athletic and her body measurements are 35-25-35 in.