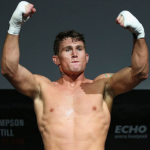 Facts About Darren Till

25-years, Darren was born on 24th December 1992 in Liverpool, Merseyside of England. His nationality is English. At the age of 12, he began his training and became professional at the age of 15. His birth sign is Sagittarius. His religion is Christianity.

Net worth of Darren

Darren is very secretive person. He has not revealed information about his private life. Accordint to the some website he has a daughter whom he left to live with her Brazilian mother in December 2016. He had gotten a tattoo on his left arm of his ex-girlfriend, the mother of his child, for a birthday gift.